Dr Kumar: Nobody in my family passed 10th grade 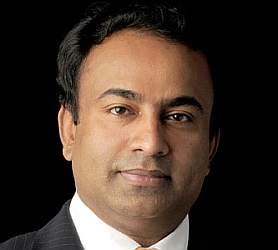 "Where the mind is without fear and the head is held very high." This famous quote of Nobel winning poet Rabindranath Tagore is what drives Dr Anand Kumar, the deputy managing director (DMD) of Indian Immunologicals (IIL).

Dr Kumar, who has had a great career working in many big companies in India and abroad, did his masters from PSG college in Coimbatore in microbiology and also obtained his PhD in the same field from ICMR's institute in Pondicherry in 1992. His doctoral research involved the development of immunoassays for the quantification of bacterial toxins.

After his PhD, Dr Kumar joined Transgene Biotek in Hyderabad in 1992. He joined the company as a scientist whose job was to develop immunodiagnostic kits for pregnancy, rheumatoid arthritis, and typhoid. Dr Kumar mentions, "The company realized that there was a big gap between marketing and R&D." And this is when the company made him manager of product development and asked him to act as an interface between the marketing and the R&D teams.

Then in 1994, Transgene, which was primarily a diagnostics company, ventured into the domain of vaccines and went into the development of recombinant hepatitis B vaccines. Dr Kumar says, "Transgene entered in the recombinant vaccine space far ahead of Shantha Biotech and Bharat Biotech. In fact it was the first company in India to venture into recombinant hepatitis vaccine, after buying the technology from a Germany-based Rhein Biotech."

Dr Kumar was sent to Germany where he worked in Rhein Biotech and learned the technology to make recombinant hepatitis vaccine. When he came back to India, he played a major role to setup the pilot plant in Hyderabad, bought all the required equipment, hired people, did all the pre-clinical trials for safety and efficacy in small animals. From 1994-96 he was the project manager for Hepatitis B vaccine at Transgene Biotek.

Dr Kumar, during his stint as project manager, had to deal with the various regulators in India. While recalling his experience, he says, "After putting in so much of blood and sweat for this hepatitis vaccine, I was so frustrated with the delays in the approval process that I decided to leave India for good." In 1996, he indeed left India and joined Fernz Health and Science (now Argenta) in Auckland, New Zealand. Here he headed the microbiology and the virology department. During his stint at Fernz, he was involved in developing novel assays as routine methods to quantify interferons is very laborious, which takes four-to-five days to show results.

Dr Kumar continues, "I worked at Fernz for about 2.5 years and then I joined Schering Plough, in Wellingtion. I worked in this company as a research scientist for four years in R&D department. Since this company was developing various vaccines for animals, my I had transitioned from human health to animal health. The vaccines that I worked on in Schering sere multi-valent Clostridial vaccine, Moraxella bovis vaccine, and Fusobacterium vaccine among others. I also used to provide process support to the manufacturing department as I had good understanding of fermentation and bioprocess.

After four years at Schering Plough, Dr Kumar then moved to Pfizer Global Manufacturing in Perth, Australia. He happily tells, "It was my dream to work for the biggest name in pharmaceutical industry. From my R&D role, I moved to take up the job of senior technical specialist in Pfizer, I used to work in quality assurance. I kept on taking new roles as and when the opportunity came my way. All along having worked in bioprocess, the opportunity at Pfizer gave me an insight into Fill/Finish. I worked for Pfizer for about four years and during that time contributed immensely to the site. I was responsible for the commissioning of a state-of-the-art restricted access barrier system (RABS) filling line and had a good exposure to modern blow fill seal machines for making sterile injectables.. I was also in the executive committee of Parenteral Drug Association (PDA), Australia, a body that governs injectables."

Dr Kumar then joined as a vice president in Wockhardt Biotech in 2006 December. At Wockhardt, he was responsible for quality control and quality assurance of various recombinant products such as insulin, erythropoietin, and glargine among others. "When we wanted to take our insulin to the developed markets, the guidelines were not very clear on what kind of tests should be performed to establish comparability with the innovator. We devised a strategy that included a battery of orthogonal tests and the voluminous data, which was accepted by the US FDA without a single query. During my tenure there we also completely overhauled the cold chain system by incorporating good distribution practices," says Dr Kumar.

He worked at Wockhardt for nearly four years when Indian Immunologicals (IIL) was looking for a deputy managing director (DMD), who knew various aspects of the biotech business. Dr Kumar, while speaking about the reasons behind his selection, says that, "There are very few people who had the experience of working for both animal and human biotech companies, I have a strong microbiology background and have worked in different functions in several companies, I had worked for the best in the business such as Pfizer and I have come back to India and adapted myself according to Indian standards of working. These factors went in my favor." He joined IIL in December 2010.

Talking about his move to IIL, Dr Kumar says that it was really a challenge moving from a private organization to IIL, which is a wholly owned subsidiary of the National Dairy Development Board. He made some quick organizational changes to the top tier on joining, streamlined manufacturing, modernized plants, increased capacities and reduced wastage. All the changes that were made by him along with the untiring support and belief of his team yielded rich dividends. This is evident from the fact that within a year of making Rakshaovac-FMD, the vaccine became the largest selling brand in the veterinary market with a turnover of over $18.18 million (Rs100 crores). Dr.Kumar says, "IIL is a company that has a true heart. We strive everyday to make our products affordable by employing the latest in technology".

Dr Kumar, who is a member of the expert committee on vaccines for US pharmacopeia and Indian pharmacopeia, believes that the turning point in his life was when Transgene gave him the opportunity to become the project manager of hepatitis B Vaccine. He believes that had he not been given this opportunity, he would have been stuck in the lab.

The biggest challenge Dr Kumar says was coming back to India after working overseas in top class companies for so long. "There is a huge difference in terms of standards in India as compared to that overseas, and also the work culture is very different. The culture there is very transparent whereas here in India, it is very secretive. People here do not reveal if they have made any mistakes for the fear of being punished whereas there if someone has done something wrong, they will admit it from which others can learn as well," mentions Dr Kumar. He also adds that the western world is "process driven" and in India, its "people driven". In the western world, the means to the end is important whereas here end result seems to be important irrespective of the means taken to achieve it. He, however, quickly reckons that everything that is practiced in the western world cannot be implemented in India.

But life was not all that easy for Dr Kumar in the beginning. Dr Kumar is from a village near Coimbatore and nobody in the family lineage had passed 10th standard. When asked what motivated him to get this far, he says, "I have just been doing the basics right. We are from the village, we are taught certain ethics and values and I have never compromised on that."

It is hard to imagine that the DMD would be thinking of anything else other than work, when there is so much on his plate. However, surprisingly, Dr Kumar is a vary active sportsman. He used to play in the Wellington Cricket league for the Indian Sports Association. "After coming back to India I do spend time playing table tennis after work". He also listen to music, with famous Tamil singer, lyricist and film composer, Illayaraja, being his favorite musician.

Dr Kumar is certainly an inspiring figure for the youth in the biotech industry. To the young generation in the field, he says that, "People say that a rolling stone gathers no moss. I totally differ contradict this saying. One needs to move around and if one is stuck in just one place, he/she will never grow/learn." Another point that Dr Kumar emphasized on is that the youth should focus more on knowing the breadth of the knowledge rather than the depth of the knowledge, because according to Dr Kumar, "Sometimes your thoughts become too narrow when you go deep into things too early."

Although Dr Kumar has been in the industry for so long, he has not stopped learning. In January 2012, he did a month long senior management development course from the Indian Institute of Management (IIM), Ahmedabad. He believes that one should have the knowledge of not only the technical side but also of how a business is run. "I am in the current role since the last couple of years. I appreciate this company for hiring a technical guy like me for the position of DMD, where generally these roles are for the people from finance or marketing. This shows the company's commitment to quality manufacturing, " concludes Dr Kumar.