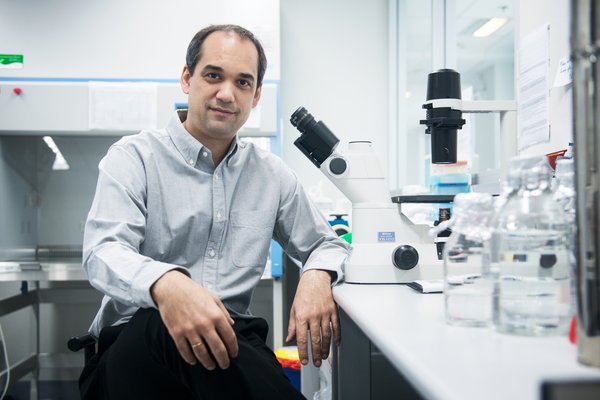 An international research team at Mahidol University in Bangkok, Thailand, has demonstrated the potential for a new blood test to detect clinically significant prostate cancer in high-risk patients, as reported in the medical journal Cancers on 27 July 2019.

According to lead scientist, Dr Sebastian Bhakdi, the test is capable of isolating and visualising tumour-associated circulating endothelial cells (tCEC) from a small, 10mL blood sample.

"Tumour-associated circulating endothelial cells are highly promising biomarkers for the detection of early-stage cancers because they are thought to derive directly from a tumour's own blood vessels," he explained.

"Unfortunately, however, they are extremely rare and almost indiscernible from normal blood cells, which is why they have been considered undetectable in routine laboratories until now."

While malignant tumours start growing blood vessels when they are as small as 1mm in size, Dr Bhakdi said dormant tumours don't behave the same way. As a result, tCEC may be one of the first types of tumour-associated cells to be shed into the host circulation and may indicate whether or not the disease will actually harm the patient.

"Not all cancers need treatment," he explained. "It's not only important to detect the disease early, but also to gauge whether or not it is aggressive in nature. Testing for tCEC could solve both issues at the same time."

In collaboration with private partners, Dr Bhakdi and his team have developed a series of new technologies operating at sub-zero temperatures that allow them to isolate tCEC from whole blood in as little as 6 hours and visualise them under the microscope.

"We've developed the world's first tCEC-based screening assay capable of routinely detecting these very rare cells in standard blood samples. And our study suggests that our assay serves very well in distinguishing between men with and without clinically significant prostate cancer," he announced.

According to the Thai-German physician now working out of Singapore, the novel tCEC test was not designed as a stand-alone assay but as an add-on to prostate-specific antigen (PSA) screening so it would fit seamlessly into existing diagnostic pathways.

"PSA screening is a hotly debated topic in modern urology. In more than 75% of all cases where PSA testing has led to a multi-core biopsy of the prostate, it came out negative - meaning the patient underwent a highly invasive procedure for no reason at all," Dr Bhakdi said.

"Our tCEC test may now fill the gap between PSA screening and biopsy - ensuring that only those patients who really need to will undergo the operation. With this, we hope to create real clinical benefit without having to shake up existing diagnostic pathways."

Dr Bhakdi added the world-unique test has been put to the test as part of a prospectively blinded screening study that took place 2016–2019 and covered some 170 patients.

The results - now published in Cancers, one of the highest-ranking oncology journals in the world - indicate that tCEC testing could avoid more than 70% of biopsies triggered by PSA readings in the so-called "diagnostic grey zone" (4-20ng/mL).

According to Dr Bhakdi, the team was especially pleased about the test's high negative predictive value (the probability that subjects with a negative screening test do not have the disease) of 93%, which would be key to confidently rule out false-negative results, and with it, further examination of the patient.

"There are several promising assays to rule in prostate cancer, most prominently PSA and multi-parametric magnetic resonance imaging (mpMRI)," he said. "The problem is that none of them is able to confidently rule out the disease, which is key to avoiding potentially harmful follow-up testing. In combination with PSA as a rule-in test, our test's high negative predictive value could finally fill that gap."

On the back of the landmark publication, Dr Bhakdi also confirmed that a validation study covering more than 1,000 prostate cancer patients is currently underway at Mahidol University's Siriraj Hospital in Bangkok, Thailand.

Additional studies exploring the utility of tCEC testing for other cancers are underway as well.

The tCEC test technologies described in detail in the publication will be commercialised and distributed by X-ZELL, a Mahidol spin-off company founded by Dr Bhakdi and colleagues.