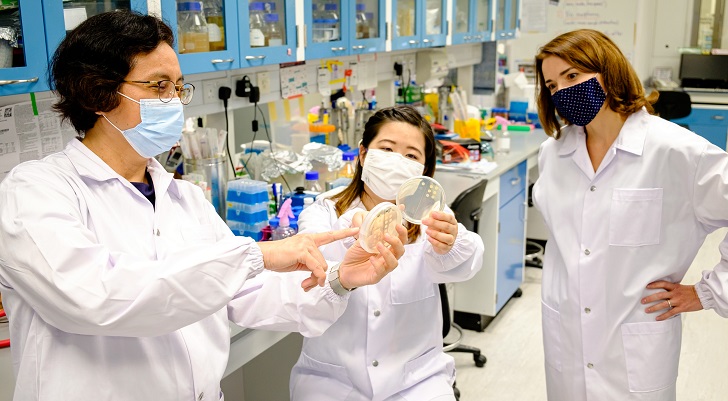 Scientists at Nanyang Technological University, Singapore (NTU Singapore) have developed a synthetic peptide that can make multidrug-resistant bacteria sensitive to antibiotics again when used together with traditional antibiotics, offering hope for the prospect of a combination treatment strategy to tackle certain antibiotic-tolerant infections.
On its own, the synthetic antimicrobial peptide can also kill bacteria that have grown resistant to antibiotics.
The NTU Singapore team, led by Associate Professor Kimberly Kline and Professor Mary Chan, developed an antimicrobial peptide known as CSM5-K5 comprising repeated units of chitosan, a sugar found in crustacean shells that bears structural resemblance to the bacterial cell wall, and repeated units of the amino acid lysine.
The scientists believe that chitosan’s structural similarity to the bacterial cell wall helps the peptide interact with and embed itself in it, causing defects in the wall and membrane that eventually kill the bacteria.
The team tested the peptide on biofilms, which are slimy coats of bacteria that can cling onto surfaces such as living tissues or medical devices in hospitals, and which are difficult for traditional antibiotics to penetrate.
In both preformed biofilms in the lab and biofilms formed on wounds in mice, the NTU-developed peptide killed at least 90 per cent of the bacteria strains in four to five hours.
The research on the CSM5-K5 antimicrobial peptide was funded by NTU, the National Research Foundation, the Ministry of Education, and the Ministry of Health.