A gift capital of US$3 million to NUS is likely to drive research, education and innovation in the field of endocrinology, particularly in the area of translational research in diabetes 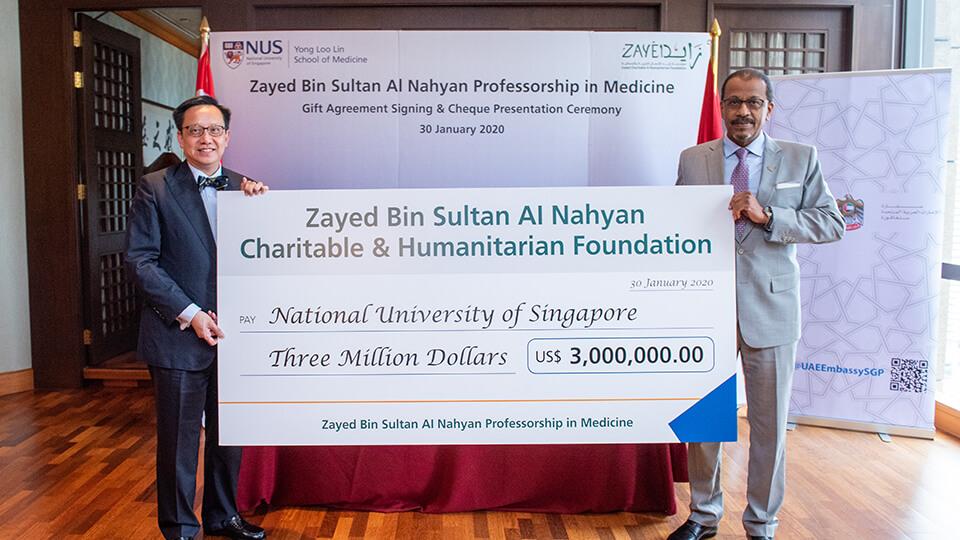 The Zayed Bin Sultan Al Nahyan Charitable & Humanitarian Foundation is donating US$3 million to the NUS Yong Loo Lin School of Medicine (NUS Medicine) to drive research, education and innovation in the field of endocrinology, particularly in the area of translational research in diabetes.

It is the first time a Singapore tertiary institution is receiving a gift from the foundation based in the United Arab Emirates (UAE), and comes as both countries tackle rising diabetes rates.

Because of the gift, the Zayed Bin Sultan Al Nahyan Professorship in Medicine will be set up to support research in the use of technologies and genomics to understand individuals’ pre-disposition to diabetes.

As an endowed professorship, the gift capital of US$3 million will be preserved in perpetuity, and invested to generate an annual income that will fund the professorship.

The professorship will be named after Sheikh Zayed Bin Sultan Al Nahyan, the founding father of the UAE, who was noted for his philanthropy and humanitarian legacy.

Sheikh Zayed had steered Abu Dhabi to independence from the British, and drove its consolidation into the UAE, a union of seven emirates on the western side of the Arabian Gulf. A noted philanthropist, he believed oil wealth was a gift to be shared with countries and people in need.

“We are deeply grateful for the foundation’s shared belief in the importance of research and collaboration in the field of endocrinology and metabolic health and its very generous support of our ongoing research. Diabetes is a deadly scourge and this professorship will be an important launch pad for future academic exchanges and collaborations to advance transformational research in this field,” said Professor Chong Yap Seng, Dean of NUS Medicine.

Both Singapore and the UAE have rising rates of diabetes and prediabetes, and both countries’ governments have announced plans to reduce diabetes prevalence.