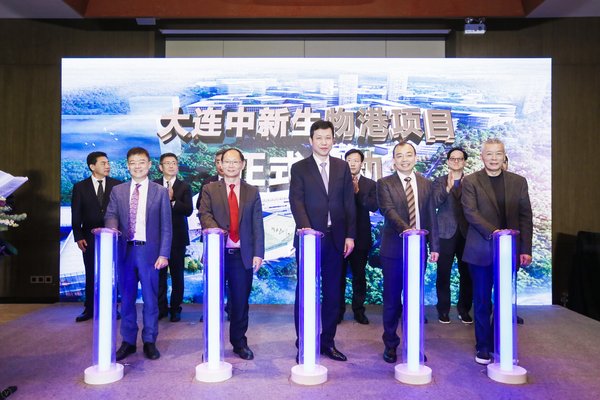 The official launch ceremony of Sino-Singapore Biotech Hub was held recently at Grand Hyatt Hotel, Dalian, China. The project construction is scheduled to start in March 2020 and targeted to be available for biotechnology transformation, research and development and ready for manufacturing processes and production by end of 2020.

The Biotech Hub project totals an investment of RMB1.9 billion yuan, covers a total area of 33,000 square meters with a construction area of 28,500 square meters. Through Singapore based Biosyngen Group acting as the bridge, it opens the gateway of biomedical technology and products from Singapore, Europe and Australia to achieve commercial development of biotech technologies, production and sales in China.

At the official launch ceremony, the Lushunkou District Government and Stone Capital jointly signed a Memorandum of Understanding (MOU) of Healthcare Fund to raise an investment of RMB 2 billion yuan, and the headquarter of Biosyngen China is inaugurated.

Dalian Sino-Singapore Biotech Hub, located near Dalian Medical University and Dalian University of Foreign Languages in Lushunkou district, is listed as one of 2019 key projects of Dalian Government for the city.

The launch of the Biotech Hub is a concrete step for building a landmark project of the healthcare industry in Northeast Asia. It took a total of 266 days from the first visit of Mr. Zuojun Tan's to Biosyngen China on March 31st, to the official launch held on Dec 22th.

On July 29, 2018, the Biotech Hub agreement was signed and witnessed by Mr. Yijun Tang, Liaoning Governor and Mr. Masagos Zulkifli, Minister for the Environment and Water Resources of Singapore. During this period and under guidance of Mr. Guowei Jin, Dalian Deputy Mayor, both Biosyngen and Dalian government have interacted and discussed over 50 times.

As expressed by Mr. Hongwei Zhao, Secretary of CPC Lushunkou District Committee, "This project signifies the full and efficient support of all departments of the municipal government, including the guidance of the leaders of Dalian Medical University, and the sincere cooperation between Biosyngen Group and our district". Dr. Victor Li, Founder and CEO of Biosyngen Group, said, "With the continued strong support of Singapore government, Agency of Science, Technology and Research (A*STAR) and Institute of Molecular Cell Biology (IMCB), Biosyngen Group will draw on Sino-Singapore Dalian Biotech Hub as a base, conduct in-depth research cooperation and leverage on medical resources from Dalian Medical University , to accelerate the commercialization of biotechnology products in China."

Mr. Liqun Wang, Founder and Chairman of Stone Capital and Director on Board of Biosyngen Group, said, "In order to improve efficiency, Stone Capital has set up a Biotech fund in Singapore, called, BioSyn-Stone Capital (USD 50 million fund for early stage biomedical projects). "With assistance of the provincial and municipal industry guided funds of Liaoning Province and Dalian, Stone Capital will build a healthcare fund of RMB 2 billion yuan, which will further facilitate the settlement and growth of pharmaceutical and biological companies (including Singapore companies) in the Dalian Sino-Singapore Biotech Hub.