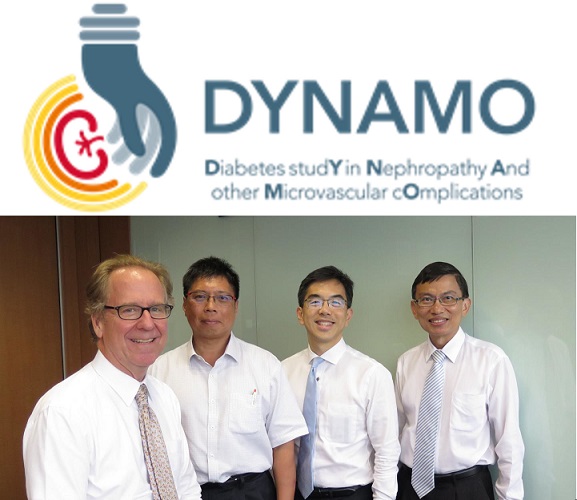 Launched in 2017 as a key initiative of Singapore’s War on Diabetes, DYNAMO marshals resources from 25 institutions in six countries under the aegis of Singapore’s leading research and healthcare institutions, with the aim of improving the understanding of diabetic kidney disease (DKD) and working to reduce the prevalence of DKD in Singapore by 30 per cent over five years.

Foundation Singapore under its Large Collaborative Grant Programme (NMRC/OFLCG/001/2017) and is administered by the Singapore Ministry of Health’s National Medical Research Council.

“Diabetic kidney disease has been a subject of research for many years and, despite that fact, we don’t really understand the major root causes of kidney disease in diabetes,” said Prof Coffman, who is the Dean of Duke-NUS Medical School and a nephrologist. “DYNAMO represents what we can accomplish for patients when we combine the world-class research and infrastructure in Singapore with our cadre of talented investigators who have a passion to address this problem.”

Taking a multi-pronged approach to DKD research, DYNAMO spans basic discovery science to patient-based clinical research, taking advantage of ‘omics’ studies – such as genomics, metabolomics and transcriptomics – to better understand the disease biology and risk factors behind DKD. Central to their work is their access to large, multi-ethnic patient cohorts and patient samples in Singapore, which allow DYNAMO researchers to segregate and study patients who progress to DKD or maintain stable kidney function. This is important in enabling DYNAMO researchers to identify the biological factors that cause DKD.

A brief overview film on DYNAMO was prominently showcased at the ASN’s Kidney Week Forum, the most respected forum for kidney research in the world, this year. The film was broadcast on screens in high visibility areas throughout the Walter E. Washington Convention Center, in Washington, DC, where the Forum was held, as well as delegate hotels as part of a compilation of ASN TV films streamed alongside ASN TV programmes, such as news and interviews from the conference. The DYNAMO film has also been made available on several media platforms, including the Society’s ASN TV channel, the ASN Kidney Week website, YouTube and various social media channels.

Besides working to improve understanding of DKD, DYNAMO works to develop ways to predict which diabetic patients will progress to DKD. In future, these factors will also allow researchers to determine biological targets and biomarkers for drug development and disease prognosis, respectively.