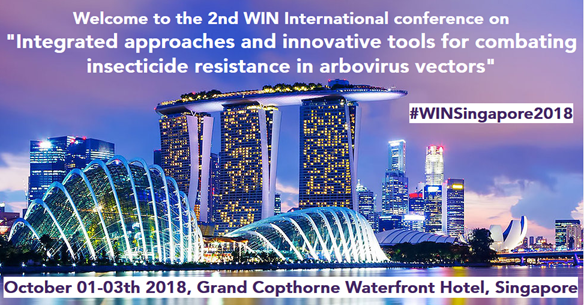 The resistance of mosquito borne arboviruses such as dengue, zika, chikungunya and yellow fever are now a major threat to public health worldwide. These mosquitos that transmit them are becoming increasingly resistant to insecticides used, with a recent review highlighting that 40 countries have reported resistance to at least one chemical class in the vector Aedes mosquitoes. The French National Research Institute for Sustainable Development (IRD-France) and Duke-NUS Medical School, Singapore, have joined forces to organise a 3-day global conference to discuss progress, review research gaps and priorities in controlling emerging arboviruses and the management of insecticide resistance, starting today at the Grand Copthorne Waterfront Hotel in Singapore.

“This is the second time such an international conference is being organised and the first time it is held in Singapore. It will convene scientists, key members of the public and private sector and decision-makers from around the world to review the progress of current vector control strategies and to share knowledge of better tools and technologies to overcome the problem of insecticide resistance," stated Asst. Prof. Julien Pompon from Duke-NUS' Emerging Infectious Diseases (EID) Signature Research Programme and co-organiser of WIN 2018. "Many of the emerging arboviruses can also be better managed through informed protective measures."

“Insecticide resistance has contributed to the re-emergence and spread of arboviral diseases in some parts of the world, and is now recognised as a major threat for vector control,” commented Prof. Vincent Corbel from IRD, a medical entomologist with over 17 years’ experience in vector research, who currently leads the Worldwide Insecticide Resistance Network (WIN), supported by the World Health Organization (WHO). “Important knowledge gaps remain on mosquito resistance, including its distribution, dynamics, mechanisms and impact on vector control. There is an urgent need to review progress and achievements made for the surveillance and control of arbovirus vectors and to discuss their potential for mitigating insecticide resistance.”

The Conference runs from October 1-3, 2018, and gathers approximately 150 leading scientists, private and public sector representatives, decision makers and other key stakeholders from around the world to share information and provide recommendations for the improvement of insecticide resistance surveillance and deployment of innovative vector control tools. A roster of distinguished speakers with international recognition in the field of arboviral diseases, vector control and insecticide resistance are addressing the audience.