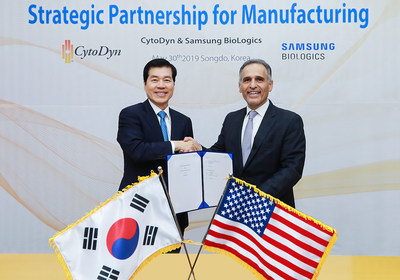 CytoDyn Inc., a late stage biotechnology company developing leronlimab (PRO 140), a CCR5 antagonist with the potential for multiple therapeutic indications and Samsung BioLogics met at the Samsung BioLogics Songdo headquarters in South Korea for an official signing ceremony of the manufacturing agreement with Samsung BioLogics that was previously announced on April 2, 2019.

"Samsung BioLogics is very excited to be partnering with CytoDyn to bring this potential blockbuster drug to the market. It is clear that leronlimab and the CytoDyn team have an opportunity to bring significantly improved care to HIV patients around the world. Samsung BioLogics is proud to support this effort by providing a stable supply of only the highest quality product," said Dr. Tae Han Kim, CEO of Samsung BioLogics.