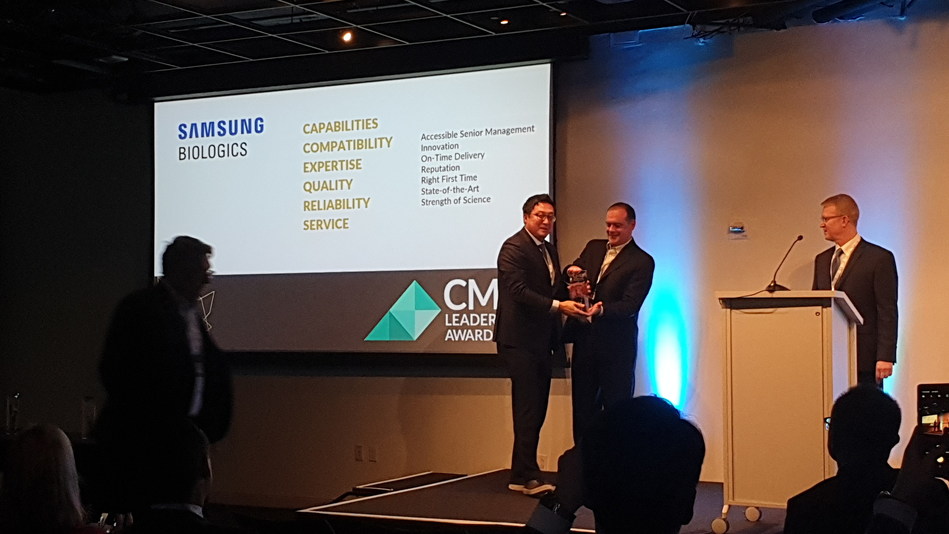 Samsung BioLogics, a global leading biopharmaceutical Contract Development and Manufacturing Organization (CDMO) based in South Korea, is pleased to announce that Samsung has won CMO Leadership Awards for all six core categories for the third year in a row in the 8th annual CMO Leadership Awards Reception presented by Life Science Leader.

The company has received CMO Leadership Awards including this year's awards for the sixth consecutive year since 2013, proving Samsung's highest quality of biologics manufacturing service to global customers.

"The value and importance of the Life Science Leader CMO Awards grows each year. No industry awards are more meaningful than these recognizing the highest level of accomplishment as evaluated by actual customers. An award in any of the categories assessed, including capabilities, compatibility, expertise, quality, reliability and service, adds a clear acknowledgment of the leadership provided by the CMO recipient. Our congratulations to all of this year's CMO Award winners you keep the industry on the path to further success," says Louis Garguilo, Chief Editor and Conference Chair, Outsourced Pharma.

Survey participants were recruited from Pharma and Biopharma companies of all sizes and were screened for decision-making influence related to working with contract manufacturing suppliers. Respondents only evaluate companies with which they have worked on an outsourced project within the past 18 months. This level of qualification ensures that survey responses are based on actual involvement with contract manufacturers and clear experiential data.

Samsung BioLogics, being responsible from clinical development to commercial manufacturing, aims to strengthen its presence in the rapidly growing global biopharmaceutical market by utilizing its world-class plant design and operation technology that maximizes production efficiency and ensures highest quality products for the patient.