The research team was led by Dr Feng Yibin, Associate Director of the School of Chinese Medicine, HKUMed. 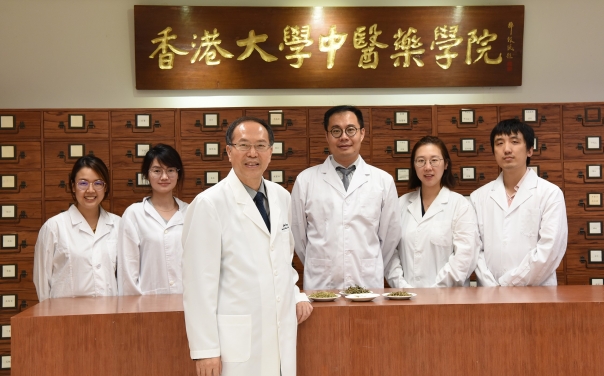 A research team at the LKS Faculty of Medicine, The University of Hong Kong (HKUMed), has discovered the potentials of a SECISBP2 protein in adipose tissue macrophages (ATMs) as a therapeutic biomarker in the treatment of chronic diseases such as type 2 diabetes, hyperlipidemia, cardiovascular diseases and cancers caused by obesity-induced insulin resistance.

Development of localised and systematic insulin resistance during obesity is linked to inflammation of adipose tissue. Previous observation has suggested that a binding protein, called SECIS Binding Protein 2 (SECISBP2), was down-regulated in the fatty tissue of patients with obesity-induced diabetes, but the role and mechanism of the protein in the pathogenesis of obesity and type 2 diabetes was unclear.

In the pilot study, conducted with 20 obese patients with diabetes, researchers found that the expression of SECISBP2 was suppressed in ATMs in the trial group. The pilot study also observed that TNTL (Tangningtongluo), a herbal product derived from a traditional medicine used by China’s Miao people, could remarkably reduce blood glucose levels and improve hemoglobin 1Ac, indicating the potential for an in-depth follow-on study.

The research team hopes to continue to investigate the role of SECISBP2 in the pathogenesis and treatment of other insulin resistance-related metabolic disorders such as diabetes, hepatic diseases and cancers, and identification of effective targeted molecules from traditional and modern herbal formulas for the treatment of related diseases.