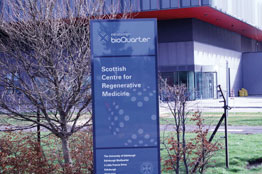 The BioQuarter facility in Edinburgh, Scotland

Life sciences has been chosen as one of the sectors that the autonomous Scottish government of Mr Alex Salmond is giving special attention to. Scotland is a small country of less than six million people, situated north of England and is part of the United Kingdom. The political leadership of Scotland is sold on life sciences. Ms Nicola Sturgeon, deputy first minister and the cabinet minister for health and well-being, co-chairs the Scotland Life Sciences Advisory Board. Under the power devolution formula devised by the UK, Scotland has its own Parliament and government, and is run by the first minister (equivalent to a Prime Minister) and deputy first minister with a cabinet.

Mr Andrew Henderson of Scottish Enterprises explains, "Scotland has 640 organizations in this field, employs 32,000 people and generates more than $4 billion in annual revenues and the industry has been growing at six percent per annum since 1998." Furthermore, Scotland is one of the world's top five destinations for clinical trials.

An ambitious strategy to double Scotland's life sciences output to $8 billion by 2020 was unveiled in 2005. Some of the identified sectors for growth include stem cells and regenerative medicine, contract manufacturing, clinical trials, medical devices, cancer and cardiovascular diseases.

"Scotland has been a hotbed for innovations for centuries. We want to build on it and make it one of the choicest international destinations for innovation, collaboration, manufacturing and services in life sciences and also as a gateway to Europe," says Ms Anne MacColl, CEO, Scottish Development International, during a recent interaction.

High quality human resources coming out of 16 universities, five of which are ranked among the top five in the world's best 200 educational institutions, is one of the major strengths of the country. Physical infrastructure and industry-friendly government policies are an added attraction. The three major life sciences clusters, Glasgow, Edinburgh and Dundee, are separated by 60 km each and has excellent road and rail connectivity for quick movements.

A new 100-acre facility, called the Edinburgh BioQuarter, is coming up in south Edinburgh, adjacent to the Royal Infirmary (a 1000-bed teaching medical hospital), to provide an integrated infrastructure for life science companies. BioQuarter is being built by US-based, Alexandria.

One of the major occupants is the new $90 million Scottish Center for Regenerative Medicine (SCRM), which has modern research, manufacturing and commercialization facilities and houses 220 researchers. It is Europe's largest stem cell research center, said Mr Mike Capaldi, commercialization director of Edinburgh BioQuarter.

The BioQuarter has built up space in excess of two million square feet and the $1.2 billion facility has been built through the public-private partnership model. Companies locating here will have ready access to the 1,150 researchers at the nearby University of Edinburgh Medical School, a $34 million bioincubator and the patients at the Royal Infirmary for clinical research. The Roslyn Institute, where Dolly, the world's first cloned sheep was born, is also located nearby.

With many more such advanced facilities, Scotland has embarked on a high decibel campaign to make the world sit up and take notice of its expertise in life sciences. Scottish Development International, the agency tasked with this project, has been meeting life science companies in India in recent weeks. The emphasis here to drive the message that the Scotland Government will do everything in its power to boost its business friendly policies. No wonder that although it is a relatively small country, it already has more than 2,000 foreign companies that have significant presence.

Innovation is in the country's gene. The list of original inventions from Scotland is very long and includes Dr James Young Simpson, who was the first person to introduce chloroform in anesthesia in 1847; Dr John Macleod, a Scottish scientist who discovered of insulin in 1923; invention of hypodermic syringe by Dr Alexander Wood in 1853; pioneering ultrasound scan by Dr Ian Donald in 1950s; the discovery of beta-blockers by Dr James Black and development of Zantac and Ventolin by Dr David Jack in 1980s.

Now Scotland is preparing for the next wave of innovation.

It started in 1919 as the manufacturing site for chemical dye, Indanthrene Yellow G, the first one outside Germany. The original chemical plant of Scottish Dyes, situated in a small village Grangemouth, midway between Edinburgh and Glasgow, is now a swank new facility of India's Piramal Healthcare.

Piramal Healthcare inherited the facility through the acquisition of ICI Chemicals and on March 26, 2012, the site started commercial production of antibody drug conjugate (ADC), also called the 'smart bomb' since these molecules are used in a new range of anti-cancer drugs that hunt and destroy cancerous cells in patients.

"The drug got approval from the US FDA recently and will soon be available in Scotland too, after receiving European regulatory approval," the facility's engineering manager, Mr Ian McLean, told BioSpectrum in March during a visit to the manufacturing unit.

The Grangemouth facility is one of Piramal Healthcare's eight manufacturing units around the world and is one of the world's first such unit to make ADCs commercially on contract. Piramal works with 11 of the 16 global users of ADCs. Piramal has invested nearly $3 million to upgrade the facilities with quality control labs and new manufacturing suites in recent years. The company received significant assistance from Scottish Enterprise, the Scottish government agency that supports businesses in Scotland.

"The expansion of Piramal's Grangemouth facilities is further evidence of Scotland's growing reputation as the ideal place to locate and do business. Investment like this provides new jobs and delivers new business opportunities and supply chain development across the local economy and throughout Scotland," said Ms Linda Hanna, company growth director, Scottish Enterprise.

Just outside Edinburgh, located in the Pentlands Science Park, is a unique company, Angel Biotech. This publicly listed biotech firm is a leading contract manufacturer of stems cells that are used in a variety of new regenerative therapies.

Angel has been at the forefront of developing new stem cells therapies developed in research labs into products for commercialization. Angel provides small scale manufacturing facility and test the strengths of these lines developed in laboratories.
It is also a major contract manufacturer of recombinant proteins, antibody and bacteriophages.

(The writer was in Edinburgh, Scotland, at the invitation of Scottish Developing International)