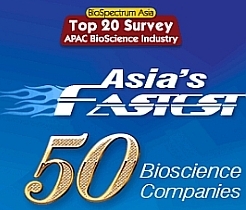 The annual list of Asia's fastest growing pharma companies, compiled painstakingly by the BioSpectrum Asia team, is out. A remarkable aspect of the growth of companies in 2012 is the gravity-defying activities of at least 16 of the top 50 fastest growing companies.

As companies' revenue size increases, they usually struggle to maintain high growth in most industries around the world. Annual growth in double digits is a luxury for many companies. However, not for these 16 pharma companies who had a turnover in excess of $100 million in 2011. These 16 companies have grown between 30 and 45 percent between 2011 and 2012.

Leading the pack is Asia's No 1 pharma company Sinopharm which grew nearly 33 percent from $16.36 billion in 2011 to $21.7 billion in 2012. Another billion dollar company, Lupin from India, too grew by 36 percent to vault from $1.02 billion to $1.4 billion within a year. High growth propelled two other companies from China-Guangzhou Pharmaceutical and Sino Biopharmaceutical - into the billion dollar club in 2012. Guangzhou leaped from $752 million to $1.08 billion with 44 percent growth and Sino Biopharma from $870 million to $1.31 billion, thanks to a whopping 51 percent jump in revenues in 2012.

The performance of these three Chinese companies is remarkable when the country's overall pharma industry actually showed a decline in 2012. So the managements of these companies can be proud of their tactics that worked well in a slowing market. India's Lupin also has something to cheer as it has been mostly in the shadows of other big boys from the country such as Cipla and Dr Reddy's Labs for a long time.

Asia's fastest growing company, Huapont- Nutrichem should be a case study for the industry. This manufacturer of active pharmaceutical ingredients (APIs) grew by a whopping 486 percent to zoom from $105 million to $618 million within a year. Not many companies of this size grow at such pace anywhere in the world in any segment.

Keeping close company is another Chinese firm, Apeloa Company, which too more than doubled in revenues from $245 million to $556 million, propelled by 127 percent growth. As Asia's pharma companies continue to grow at a scorching pace, they face enormous challenges in finding qualified people to run their complex operations. BioSpectrum has estimated that the $150 billion industry has only about 150,000 researchers whereas as industry of this should have at least double this number to maintain the growth momentum.

Besides skilled researchers who could innovate with new products and develop new manufacturing processes, the industry also desperately needs more employees to handle regulatory affairs within and outside the region, develop new clinical trial strategies and also people with excellent project management skills. Various experts BioSpectrum spoke to anticipate that these skill gaps will continue for another five years at least.

It is definitely time for academic community, industry and policy makers to step in and prepare some crash programs to entice students to the pharma industry. A talent shortage should be the last thing to stand in the way of achieving the industry's larger goal of providing affordable healthcare to people around the world.