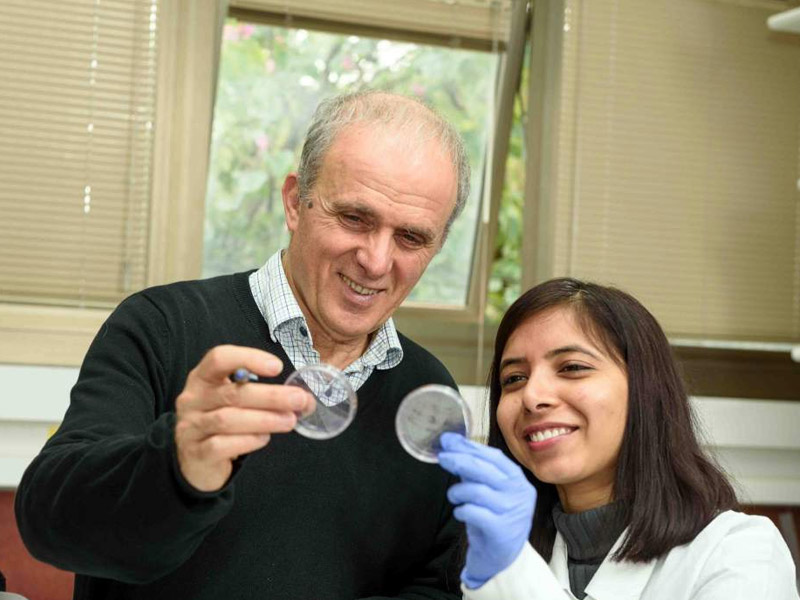 Ewing sarcoma is a bone cancer that appears mainly in teenagers. Due to a single defective gene, once it spreads to distant organs it is hard to treat. Researchers at the Weizmann Institute of Science have discovered molecular interactions underlying Ewing sarcomas and proposed a potential treatment which has shown promise in a study in mice. These findings were published recently in Cell Reports.

Postdoctoral fellow Dr. Swati Srivastava in the laboratory of Prof. Yosef Yarden in the Biological Regulation Department together with colleagues conducted research focusing on receptors for steroid hormones called glucocorticoids. These receptors are present in virtually all human cells, conveying hormonal messages related to stress, wakefulness and a host of other important functions. But sometimes glucocorticoid receptors stimulate malignant growth. They do this by moving to the cell nucleus where they physically interact and bind with transcription factors – molecules that turn genes on or off. The researchers wanted to learn more about the role of these interactions in malignancy.

A highly sensitive protein interaction analysis suitable for living cells revealed previously unknown interactions: Once activated by hormones, glucocorticoid receptors were found to be binding in the cell nucleus to transcription factors of the E-twenty-six or ETS family forming together a physical complex. One of the transcription factors in the ETS family is known to drive the development of Ewing sarcoma; its gene fuses abnormally with another gene, creating an oncogene: a cancer-causing gene.

When the study turned up this link between the Ewing sarcoma oncogene and glucocorticoid receptors, the researchers set out to test a hypothesis: that these receptors boost the growth of Ewing sarcoma. A series of studies supplied evidence that this is indeed the case. Physical binding between glucocorticoid receptors and the protein made by this oncogene increased the growth and migration of Ewing sarcoma cells in a laboratory dish and gave an even stronger boost to the growth and spread of the sarcoma in laboratory mice.

The major medical significance of these findings is that they open the door to a new treatment option for Ewing sarcoma. When the researchers implanted human Ewing sarcoma cells into mice, the tumors grew much more slowly when the mice were treated with metyrapone, a drug that is approved for the treatment of adrenal insufficiency and works by reducing the synthesis of glucocorticoids. In other experiments, also in mice, another drug, mifepristone, which blocks the glucocorticoid receptor and is approved for other clinical applications prevented the metastasis of Ewing sarcoma via a major cancer cell dissemination route from bone to the lungs. In contrast, when the researchers increased the activity of glucocorticoid receptors, the sarcomas grew and spread much faster.

Furthermore, the researchers performed a genetic analysis of tumor samples from patients with Ewing sarcoma and identified seven genes regulated by the glucocorticoid receptors that were expressed in higher-than-normal levels in patients with particularly lethal tumors. These genes might serve as a genetic signature enabling a selection of patients for treatment: Those with upregulated “signature” genes are especially likely to benefit from treatment aimed at neutralizing glucocorticoid receptors. The signature genes may also help predict the course of the disease: Their increased expression may signal a poor prognosis; reduced expression on the other hand may signal better chances for survival.

“Our findings provide the basis for a personalized approach to the treatment of Ewing sarcoma,” Srivastava says. The fact that the study made use of drugs that have already been approved for other uses should facilitate the implementation of this approach.

If research in human patients confirms the study’s findings, they may offer new hope to youngsters with this malignancy, especially in cases when the sarcoma has metastasized beyond the bone.