Thailand has potential to be ASEAN's vaccine hub

Thailand has potential to be ASEAN's vaccine hub 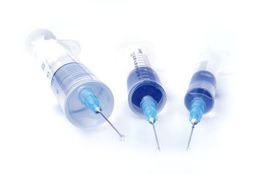 The annual vaccine procurement budget in Thailand has increased annually to $157.5 million, in 2013

Mr Muangchana said that many vaccine projects in Thailand were shelved in the past due to certain issues with law and decision-making, which hampered vaccine development in the country.

He added that the annual vaccine procurement budget from both public and private sectors in Thailand had increased annually to $157.5 million, in 2013.

Thailand had recently hosted the ASEAN vaccine conference in Phuket, to propose for co-operation and strengthen the region's vaccine market. Mr Muangchana added that the country should add necessary vaccines like rotavirus-triggered diarrhoea or hepatitis A, dengue fever and human papillomavirus (HPV) in the nation's immunization plan.

Experts have estimated the world's vaccine market to tap $100 billion by 2025. Mr Muangchana further stressed that as the vaccine market had small number of suppliers, buying or importing vaccines might increase the risk of vaccine security.

He insisted that the Thailand government must address these concerns and introduce incentives to promote the development of vaccines in the country for domestic use and to export them to other countries.

Currently GlaxoSmithKline (23 percent) is the largest supplier of global vaccines, followed by Sanofi Pasteur (17 per cent), Pfizer (13 per cent), Merck (12 per cent), Novartis (13 per cent), Sanofi Pasteur-MSD (4 per cent) as per reports. Key vaccine manufacturers in developing countries included those from India, China, South Korea, Indonesia, Brazil, Cuba and Mexico.