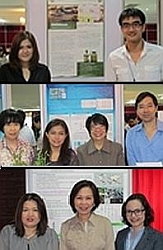 Singapore: The National Research Council of Thailand (NRCT) announced the names of winners of the NRCT Invention Award 2013, on January 24, 2013. Three inventions from Thailand's National Center for Genetic Engineering and Biotechnology (Biotec) were among the 29 award recipients of the award.

ENZbleach (an alkaline-tolerant enzyme used in the pulp bleaching process), which has been developed by Dr Thidarat Nimchua and colleagues at Biotec's Bioresources Technology Unit, was recognized in the engineering and industry category.

In a conventional chemical bleaching process a large scale of chemicals are used leading to the release of pollutants into the environment and causing numerous harmful disturbances in the ecosystem. Biotec's new biobleaching process using enzymes that leads to a significant reduction of chlorine and chlorine-based compounds. The xylanase attacks hemicellulose and alters the interface between the cellulose and lignin, thereby facilitating the chemical extraction of lignin from pulp. Moreover, ENZbleach is cellulase-free, which means that it will not destroy the structure of cellulose and diminish pulp quality.

The second Biotec product to receive the NRCT award was a diagnostic test that could be used for detection of bacterial fruit blotch in cucurbits. The test, which has been developed by Dr Oraprapai Gajanandana and her team, received the award in the agricultural science and biology category. The team developed the diagnostic test in the forms of ELISA and immunochromatographic strip test based on mouse monoclonal antibodies against Acidovorax avenae subsp.citrulli, a bacterium causing the fruit blotch disease. The test also enables epidemiological studies, disease management and quality control of seeds.

The third Biotec product, Serotyping-NS1-ELISA, which is a method for detection of dengue serotype NS1 protein and is used for serotyping of dengue virus simultaneously, was recognized in the medical science category. The product was developed by Biotec's team led by Dr Chunya Puttikhunt and collaborators from faculty of science, Siriraj Hospital, Mahidol and Chiang Mai Universities.