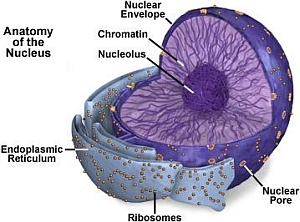 The anatomy of a cell nucleus (Source -National High Magnetic Field Laboratory, US)

Singapore: Scientists from Singapore and Germany have identified that the proteins lamin A (Lmna) and lamin B receptor (Lbr) are essential for holding silent genes in their correct position at the edge of the nucleus, in the form of heterochromatin. A deviation from their normal position will cause the genes to malfunction, leading to heart failure, vascular disease and muscle wasting.

For hundreds of years before this discovery, scientists were puzzled by why heterochromatin clustered at the edge of the nucleus and how it was relevant to normal cell function. This recent discovery will enable scientists to gain a better understanding of the diseases of the heart and muscles, and find cures for them in the future.

The scientists showed that the two proteins lamin A and lamin B receptor are important to the organisation of chromatin in the nucleus. Using mouse models, they demonstrated that in the absence of the two proteins, heterochromatin collapsed into the nuclear center. This disrupted gene expression and affected skeletal muscle development, resulting in muscle failure.

Professor Birgitte Lane, executive director of IMB, said, "This research could be particularly relevant for Singapore, as we, like other developed nations, are facing an ageing population, and heart failure, vascular disease and muscle wasting all increase with age."