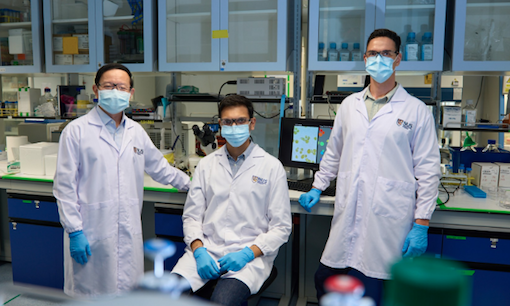 Healthy and cancer cells can look similar under a microscope. One way of differentiating them is by examining the level of acidity, or pH level, inside the cells. Tapping on this distinguishing characteristic, a research team from the National University of Singapore (NUS) has developed a technique that uses artificial intelligence (AI) to determine whether a single cell is healthy or cancerous by analysing its pH. Each cancer test can be completed in under 35 minutes, and single cells can be classified with an accuracy rate of more than 95 per cent.

The NUS team's method relies on applying bromothymol blue - a pH-sensitive dye that changes colour according to the level of acidity of a solution - onto living cells. Due to its intracellular activity, each type of cell displays its own ‘fingerprint’ which consists of its own unique combination of red, green, and blue (RGB) components when illuminated. Cancer cells have an altered pH compared to healthy cells, so they react differently to the dye, and this changes their RGB fingerprint.

Using a standard microscope equipped with a digital colour camera, the RGB components emitted from the dye inside the cells are captured. By using an AI-based algorithm they developed, the NUS researchers were able to quantitatively map the unique acidic fingerprints so that the cell types examined can be easily and accurately identified. Thousands of cells originating from various cancerous tissues can be imaged simultaneously, and single-cell features can be extracted and analysed. Compared to current standard methods of cancer cell imaging which require several hours, the process developed by the NUS team can be completed in less than 35 minutes.

As their technique is simple, low cost, fast and high-throughput, the research team is planning to develop a real-time version of this technique where cancer cells can be automatically recognised, and promptly separated for further downstream molecular analysis, such as genetic sequencing, to determine any possible drug treatable mutation.