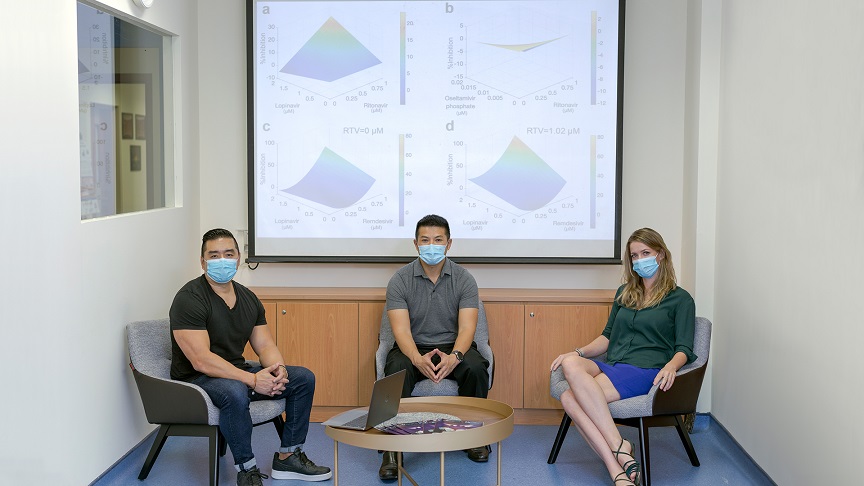 A team of researchers from the National University of Singapore (NUS) has utilised a ground-breaking artificial intelligence (AI) platform to derive an optimal combination of available therapies against SARS-CoV-2, the cause of COVID-19. Their results showed that the optimal drug therapy was a combination of the drugs remdesivir, ritonavir, and lopinavir at specific doses.

Remdesivir is a broad antiviral medication that was recently approved by the United States Food and Drug Administration as a treatment for COVID-19. The team showed that a combination of remdesivir with ritonavir and lopinavir led to a treatment that was 6.5 times more effective than the limited effects of remdesivir alone. Ritonavir and lopinavir are drugs used to treat patients with human immunodeficiency virus (HIV), but according to the NUS team’s study, and clinical trials in China, Europe, and United States, the two drugs showed little effects on their own against COVID-19. The team also showed that hydroxychloroquine and azithromycin, which are drugs considered as promising treatment options at the time of the team’s experiments conducted in April of this year, were relatively ineffective as treatment options for COVID-19.

The research team was co-led by Professor Dean Ho, Director of The N.1 Institute for Health and Institute for Digital Medicine (WisDM) at NUS, and they used their platform known as ‘IDentif.AI’ (Optimising Infectious Disease Combination Therapy with Artificial Intelligence) to investigate 12 potential drug candidates, representing over 530,000 possible drug combinations. The identification of this optimal drug combination was completed within two weeks, cutting down the number of tests typically needed by hundreds of thousands.

The work was a collaboration between NUS – including researchers from the Cancer Science Institute of Singapore and Department of Pharmacology at NUS - and researchers from Osmosis (Knowledge Diffusion), and Shanghai Jiao Tong University. The results of the study were published in Bioengineering and Translational Medicine on 10 November 2020.

This study used patient-derived, live SARS-CoV-2 to test a 12-drug set. These drugs are: remdesivir, favipiravir, lopinavir, ritonavir (ritonavir and lopinavir are given together for HIV), oseltamivir, hydroxychloroquine, chloroquine, azithromycin, losartan, teicoplanin, ribavirin, and dexamethasone. The drugs used are also utilised in many of the studies that are currently in clinical trials for COVID-19 treatment.

In traditional drug screening, a 12-drug set such as this, with 10 different doses studied for each drug, represents a parameter space of one trillion possible combinations. Using IDentif.AI, the research team was able to determine that testing only three different dose levels were needed for each drug. While this still represents 531,000 possible combinations, the team was also able to reduce the numbers of experiments needed by three orders of magnitude and complete the entire study within two weeks.

“IDentif.AI is unlike traditional AI as we do not use pre-existing data or in silico modeling to train algorithms and predict drug combinations,” said Prof Ho, who is also the Head of the NUS Department of Biomedical Engineering.

Given the diversity of different drug candidates that are being studied, and the need to evaluate different permutations of drug combinations and the respective doses, much of the data needed in order to optimise drug development simply does not exist.  “IDentif.AI is unique in that we obtain the data that we need through carefully designed experiments in order to arrive at a ranked list of actionable and optimised regimens,” added Prof Ho.

Currently, there is not enough time to develop a new drug or to repurpose an existing drug. Efficient combination therapies can be a quick hope. IDentif.AI addresses this problem by interrogating extraordinarily large parameter spaces and pinpointing the best possible combinations to treat patients with infectious diseases. This can be accomplished rapidly. “Depending on the assay and the viral pathogen, this can all be done within two weeks. In the future, IDentif.AI may also help the community avoid suboptimal drug combinations,” added Dr Blasiak.

Key results of the study

Remdesivir, lopinavir, and ritonavir at specific doses represent the top-ranked combination, resulting in almost total inhibition of infection. While remdesivir alone was the best performing single drug relative to the other drugs, the optimal combination increased the inhibition efficiency by 6.5 times. IDentif.AI was able to harness an unforeseen interaction between remdesivir, lopinavir, and ritonavir that experimentally shown to markedly increase efficacy. Therefore, IDentif.AI may be leveraged to realise unexpected drug combinations based on drugs that are ineffective as monotherapies in order to optimise treatment.

In addition, the study found that hydroxychloroquine and azithromycin, another widely studied combination, was shown to be relatively ineffective. This is different from the vast majority of previous studies which showed this to be an effective combination against SARS-CoV-2 in vitro. However, these studies used very high doses that would be very toxic for patients. Recent clinical results have suggested that more patients die with this combination compared to standard treatment.

The results of this study have demonstrated the power of IDentif.AI to rapidly discover optimal drug combinations for infectious diseases.

To provide broader insight into the extensive range of combinations explored by this study, the research team has developed IDentif.AI Online, an interactive resource that allows users to build different drug combinations online and observe corresponding efficacy and safety data for research purposes. This resource will be updated continuously as additional IDentif.AI studies are conducted with additional therapies and viral strains.

The team is also preparing to expand IDentif.AI towards locally available therapies to develop novel combinations that can be rapidly deployed and administered easily, and may also use it to find optimal treatments against other infectious diseases in future.

“With IDentif.AI, we will always be ready to rapidly find optimal therapeutic solutions for the next outbreak,” concluded Prof Ho.