Paving the way for a better understanding of how cancers spread and become killers. 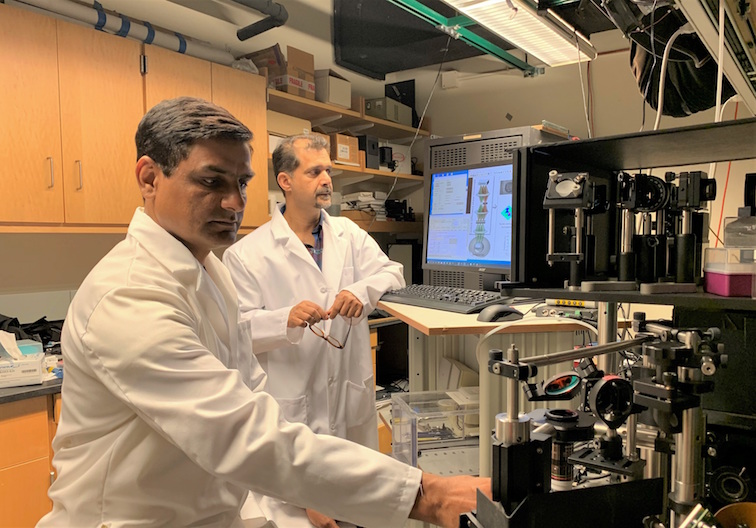 Singapore-MIT Alliance for Research and Technology (SMART), has announced a revolutionary technology to study Cell Nanomechanics.

New research discovery of SMART, MIT’s Research Enterprise in Singapore, in collaboration with MIT’s Laser Biomedical Research Center (LBRC), enables scientists to study, for the first time, membrane mechanics of cell’s nucleus, revolutionising the understanding of metastatic cancers as well as opening the doors for identification of stem cells for therapeutic applications

The new technology was explained in a paper titled “Studying nucleic envelope and plasma membrane mechanics of eukaryotic cells using confocal reflectance interferometric microscopy”, which was published in the prestigious academic journal, Nature Communications. The new confocal reflectance interferometric microscope provides 1.5 microns depth resolution and better than 200 picometers height measurement sensitivity for high-speed characterization of nanometer scale nucleic envelope and plasma membrane fluctuations in biological cells. It enables researchers to use these fluctuations to understand key biological questions such as the role of nuclear stiffness in cancer metastasis and genetic diseases.

“Current methods for nuclear mechanics are invasive as they either require mechanical manipulation such as stretching or require injecting fluorescent probes that ‘light up’ the nucleus to observe its shape. Both these approaches would undesirably change cell’s intrinsic properties, limiting study of cellular mechanisms, disease diagnosis, and cell-based therapies,” said Dr. Vijay Raj Singh, SMART Research Scientist and Dr. Zahid Yaqoob, MIT LBRC Principal Investigator. “With the confocal reflectance interferometric microscope, we can study nuclear mechanics of biological cells without affecting their native properties.”

While the scientists can study about a hundred cells in a few minutes, they believe that the system can be upgraded in the future to improve the throughput to tens of thousands of cells.

“Today, many disease mechanisms are not fully understood because we lack a way to look at how cells’ nucleus changes when it undergoes stress,” said Dr. Peter So, SMART BioSyM Principal Investigator, MIT Professor, and LBRC MIT Director. “For example, people often do not die from the primary cancer, but from the secondary cancers that form after the cancer cells metastasize from the primary site - and doctors do not know why cancer becomes aggressive and when it happens. Nuclear mechanics plays a vital role in cancer metastasis as the cancer cells must ‘squeeze’ through the blood vessel walls into the blood stream and again when they enter a new location. This is why the ability to study nuclear mechanics is so important to our understanding of cancer formation, diagnostics, and treatment.”

With the new interferometric microscope, scientists at LBRC are studying cancer cells when they undergo mechanical stress, especially during extravasation process, paving the way for new cancer treatments. Further, the scientists are also able to use the same technology to study the effect of ‘lamin mutations’ on nuclear mechanics, which result in rare genetic diseases such as Progeria that leads to fast aging in young children.

The confocal reflectance interferometric microscope also has applications in  other sectors as well. For example, this technology has the potential for studying cellular mechanics within intact living tissues. With the new technology, the scientists could shed new light on biological processes within the body’s major organs such as liver, allowing safer and more accurate cell therapies. Cell therapy is a major focus area for Singapore, with the government recently announcing a S$80m boost to the manufacturing of living cells as medicine.