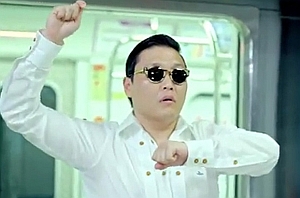 Mr Psy, whose world renowned "Gangnam Style" video has become the first in the history of the internet to surpass one billion YouTube views, will help the Rotary achieve its goal of a polio-free world by raising his thumb and forefinger in the 'This Close' gesture in an advertisement. The ad will have the tagline: "We are this close to ending polio", and will enable participants to upload photos of themselves making the 'This Close' gesture with their fingers on Rotary's 'End Polio Now' website.

Mr Psy said, "I grew up in a Rotary family as my father and my late grandfather were Rotary members. My grandfather was very passionate and dedicated to Rotary, He had a big heart and always inspired me to help others." Mr Psy's late grandfather had made substantial donations to the Rotary Foundation, the charity arm of Rotary International.

Polio eradication has been Rotary's top priority for more than two decades. The international humanitarian service organization is a spearheading partner in the Global Polio Eradication Initiative, along with the World Health Organization, the US Centers for Disease Control and Prevention, and UNICEF. Rotary club members worldwide have contributed more than $1.2 billion and countless volunteer hours to the polio eradication effort.

Great progress has been made, and the incidence of polio infection has plunged from about 350,000 cases in 1988 to 222 reported cases in 2012. More than two billion children have been immunized in 122 countries, preventing five million cases of paralysis and 250,000 pediatric deaths.