Advancing toward commercialization as base material for drug delivery systems 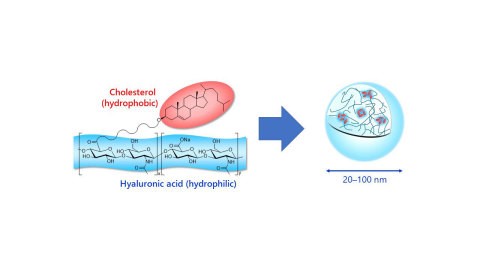 Tokyo based Asahi Kasei has established industrial manufacturing technology for hyaluronic acid (HA) nanogel as a new pharmaceutical excipient, and is providing samples to prospective customers in order to commercialize the product.

The Functional Additives Division of Asahi Kasei’s Specialty Solutions SBU supplies Ceolus™ microcrystalline cellulose to pharmaceutical manufacturers around the world for use as an excipient for drug tablets. The commercialization of HA nanogel would expand the product lineup by adding a drug delivery system (DDS) base material for injection formulations.

HA nanogel is expected to improve the quality of life (QOL) for patients by enabling the low-toxicity solubilization of insoluble drugs, facilitating the formulation of biopharmaceuticals such as proteins and peptides by suppressing their aggregation and denaturation, and reducing the frequency of injection when repeated administration is required.

HA nanogel is derived by the partial modification of hyaluronic acid with cholesterol. The physical properties of HA nanogel depend on the molecular weight of HA and the cholesterol modification rate. Asahi Kasei will make a formal decision on the commercialization of HA nanogel after confirming that the provided samples have contributed to solutions for the development of drug formulations by customers.