A mini PCR for quick diagnosis

A mini PCR for quick diagnosis 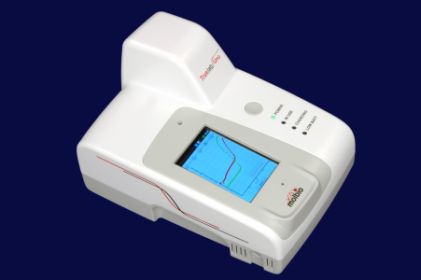 Innovation comes in all sizes. Bigtec's mini PCR, TrueLab, is the perfect example for that. TrueLab is a point-of-care, hand-held, real time quantitative mini PCR, that is battery operated. This device that can easily be lifted in one hand detects the disease organism by a polymerase chain reaction carried out on a chip that is designed using MEMS (Microelectromechanical systems) technology and is specific to each disease.

Started in 2000, Bigtec Labs develops diagnostics based on sensing technologies. The company says it will roll out the TrueLab this year and begin by focusing on diseases such as Malaria and Hepatitis B. They have also developed chips for other diseases, such as H1N1, with the support of the Indian Council of Medical Research. If all falls into place this year, a device such as this would have a huge impact on the diagnostic environment in India.

The main priority in designing diagnoctics, the management explains, has been keeping the technology as accessible as possible. With Truelab, they have not only reduced the dependance on infrastructure to a minimum but also made it battery-operated to ensure its easy use without any dependance on electricity.

Simple to operate, its design is such that a primary healthcare worker can easily use it during field visits. The patient sample is fed onto the chip that is entered into the device. The results are obtained in the form of a simple readout on the screen of the instrument and can be connected to a printer as well. The instrument is also bluetooth enabled.

An important differentiating factor with TrueLab is the fact that unlike conventional PCRs only one sample at a time can be processed. This has been done on purpose, Mr Chandrashekhar Nair, director, Bigtec Labs, insists. "What usually happens in a lab is that the technician waits till a required number of samples are collected before carrying out the PCR. Due to this, there is usually a delay of many hours or even more in carrying out the test. In this light, we focused on developing the product in such a way that each individual would get his/her results in about an hour," he says.

The time required for detection is extremely essential. Its importance is reaffirmed when Mr Nair recalls an incident from a few years back, when Truelab helped to diagnose one of his colleagues with malaria, on the first day of falling ill itself. The timely diagnosis resulted in prompt treatment and the colleague was back to work in a matter of days.

Though not the first hand-held PCR to be developed, TrueLab does differentiate itself by being a product developed indigenously in India and hence offers a major cost advantage. The price of the device will be roughly one-fifth of the cost of a PCR machine that costs upwards of $17,960 (Rs 10 lakh). The subsequent cost of carrying out the test is also reduced accordingly. Also the focus, the founders say, has always been on making it for developing countries such as India for infectious diseases and hence the chips are being designed accordingly.

In recognition of their efforts, last year Bigtec was awarded a $1.3 million grant from Grand Challenges Canada. Part of this grant will be utilized for developing novel nano material-based sample preparations for the device. Additionally, Mr Nair says that Indian government agencies have been extremely supportive by providing small grants and helping them validate the results of the device.

To make the adoption of this product into the healthcare system a reality, Bigtec has entered into a joint venture with the Tulip Group wherein Bigtec would carry out further product development and Tulip Group would be responsible for the manufacturing and marketing of the product. The product would be manufactured in Goa at the Tulip headquarters.