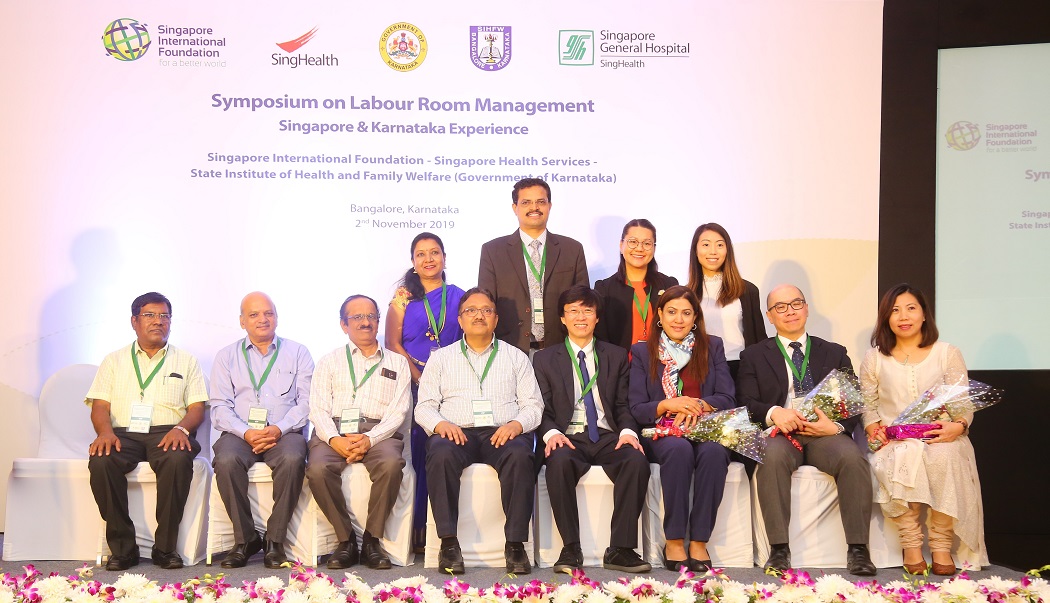 Healthcare leaders and specialists across Karnataka, India and Singapore mark the successful conclusion of a three-year collaboration between the two countries on antenatal and child healthcare in Karnataka at a healthcare symposium held in Bengaluru, India. The three-year capacity building initiative has successfully trained nearly 180 Indian healthcare professionals across the Southern Indian state and as a result, at least 100,000 pregnant mothers and newborns have benefited from better quality healthcare services.

The Enhancing Maternal and Child Health Services (EMCH) Programme is a three-year specialist programme implemented by the Singapore International Foundation (SIF) in partnership with SingHealth and the State Institute of Health and Family Welfare (SIHFW), Government of Karnataka. The EMCH Programme was designed to help augment the government’s efforts to tackle preventable causes of both infant and maternal deaths, with the aim of reducing infant deaths and ensuring safer pregnancies for more women.

Since 2016, A/Prof Tan Hak Koon, SIF Specialist Team Leader and Senior Consultant, Department of Obstetrics and Gynaecology, SingHealth has led a team of multi-disciplinary healthcare professionals from the Singapore General Hospital to work with their Indian counterparts in government healthcare institutions in 26 districts across Karnataka including Bengaluru, Belgaum, Mysuru, and Shivamogga to reduce the Maternal Mortality Rate (MMR) and Infant Mortality Rate (IMR). [Please refer to the project factsheet for more information on the project.]

These efforts also contribute towards achieving the larger UN Sustainable Development Goal 3 of Good Health and Well-Being, where the global goal is to bring the MMR to 70 per 100,000 live births and IMR to 12 per 1000 live births. In India, the Ministry of Health and Family Welfare’s has set goals of achieving an MMR of 100 by 2020 and IMR of 28 by 2019. Karnataka’s commitment to improving the reproductive and child healthcare systems has helped surpass these goals with an MMR of 70 and IMR of 25 and respectively.

“The overall health and well-being of our society is reflected in having a robust healthcare system for pregnant mothers and infants. Through the SIF and EMCH Programme, we have been able to address gaps in the antenatal care and have made improvements in our journey to providing better services and creating a reliable, sustainable healthcare environment for our citizens. We are heartened that the collaborative efforts by our Indian doctors and their Singaporean counterparts continue to reap positive effects in bringing down our MMR and IMR,” said Dr Rajkumar N, Deputy Director (Maternal Health), Department of Health and Family Welfare, Government of Karnataka.

Over the three-year EMCH Programme, the doctors, nurses, public health leaders and officials from Karnataka had the opportunity to share their knowledge and experience with their Singaporean peers through a series of training workshops, a symposium and a study visit to Singapore. All parties gained valuable insights and perspectives from the learning exchange. Among the trained pool of healthcare practitioners, 31 Master Trainers were identified and received additional training on how to cascade their knowledge to their peers in the industry.

As part of the programme, a half-day Symposium on Labour Room Management will be held at the Lalit Ashok Hotel in Bangalore today. Organised by SingHealth, the Symposium is expected to draw more than 150 delegates, including clinicians from the field of obstetrics & gynaecology, as well as ministry health officials. Experts from Singapore and Karnataka will share their perspectives on topics in the area of maternal and child health.

Professor Ivy Ng, SingHealth’s Group Chief Executive Officer, said: “SingHealth is privileged to have worked with the SIF and SIHFW, Government of Karnataka on this programme to reduce infant and maternal mortality and morbidity rates in our respective communities. Our multidisciplinary team of obstetricians, neonatologists, midwives and senior nurses has benefited from the sharing, camaraderie and knowledge exchange as they interacted with the healthcare teams in Karnataka.”

SIF’s Executive Director Jean Tan said, “The EMCH Programme brought together the medical communities in Singapore and Karnataka to help raise standards of MCH in Karnataka which has since benefitted 100,000 pregnant mothers and newborns. This impact – delivered entirely by a team of volunteers from SingHealth who have given generously of their time and talent and their counterparts in Karnataka – bears testament to SIF’s vision of making friends for a better world.”

The EMCH Programme is yet another collaborative project in India in healthcare – one of the key focus areas of the SIF’s work – and joins the ranks of similar maternity and child health programmes in Tamil Nadu (2009 – 2013) and (2015 – 2018). It also marks another milestone in the 24-year friendship between the SIF and India to uplift lives and build enduring friendships between our peoples.