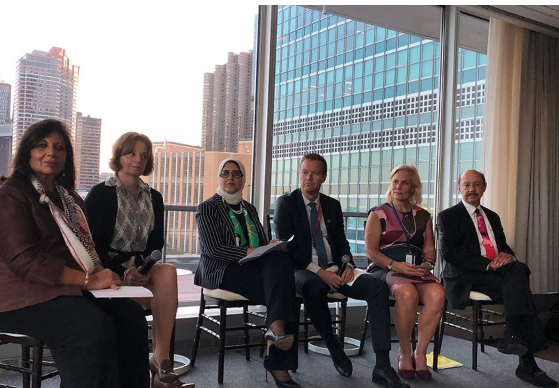 Kiran Mazumdar-Shaw, CMD, Biocon has promised to enable universal access to rh-Insulin by reducing prices to less than 10 US cents /Day for Low and middle income countries which bear the 80% diabetes burden.

The Joint United Nations Programme on HIV and AIDS (UNAIDS) welcomes this announcement to offer recombinant human insulin (rh-insulin) at US$ 0.10 per day (for the average 40 units of insulin that is required per patient per day) to low- and middle-income countries, a reduction of 50% from current prices. This announcement was made at an event hosted by UNAIDS to promote innovation in access to health care.

“Price should not be reason to choose between life and death,” said Gunilla Carlsson, UNAIDS Executive Director, a.i. “AIDS activism has led the way in reducing the price of life-saving medicines and saving millions of lives. Today, we are glad that the universal health coverage movement is also benefitting from the lessons learned by the AIDS response.”

More than 400 million people worldwide are affected by diabetes. Evidence shows that, as they live longer, many people living with HIV and on HIV treatment are increasingly susceptible to noncommunicable diseases.

Several other companies made new commitments in support of increasing access to health care at an event organized by the UNAIDS Health Innovation Exchange on the topic of decentralization, innovation and sustainable financing, which was held in collaboration with the Center for Global Health and Development at the United Nations General Assembly in New York, United States of America.

ThoughtFocus, a US based technology services company working on the internet of things (IoT), will provide access to its IoT platform, which is optimized to serve as an affordable, reliable and efficient platform to build and extend IoT solutions for transportation, logistics, manufacturing and utilities related to health-care services. The IoT has opened up a world of possibilities in health: when connected to the Internet, ordinary medical devices can collect invaluable additional data, give extra insight into symptoms and trends, enable remote care and generally give people more control over their lives and quality of treatment.

Zenysis, another US based technology company, announced that it was investing US$ 3.5 million to implement data pilots in five countries over the coming three years that will help countries to make evidence-informed decisions in rolling out universal health coverage and prioritizing investments in health systems.

“The private sector has a key role to play in advancing the Sustainable Development Goals,” said Ms Carlsson. “At UNAIDS, we believe that innovation and partnerships are the future to solving many of the basic development issues that confront us daily.”