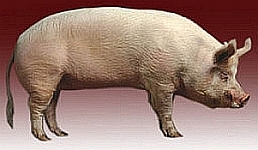 Singapore: The availability of a reference genome for a species is extremely important in the deeper understanding of its biology and evolution. Two studies involving researchers from Beijing Genomics Institute (BGI) in China have been published on the whole-genome sequencing, analysis and production of high quality reference genomes in pigs in the journals Nature and GigaScience, a BGI and BioMed Central journal.

Pigs are one of the oldest domesticated livestock species, and as well as providing one of the largest sources of meat worldwide, also provide important medical industrial resources, such as pharmaceutical-grade heparin and heart valves for xenotransplantation. The pig shares many of the same complex genetic diseases as humans, making them excellent models for studying the underlying biology of human disease.

The Nature study from the Swine Genome Sequencing Consortium presents the reference genome of a breed of pig that is an economically important food source, and the GigaScience study, led by researchers from the BGI, Beijing Institute of Animal Science and Chinese Academy of Agriculture Science, focuses on a miniature pig used for medical research. The Nature study includes the additional genomes of a number of European and Asian wild and domesticated swine species, and also released today is a series of accompanying articles covering pig genome structure and function, genome annotation, and findings of biomedical relevance in a number of BioMed Central journals.

The study in the international open-access journal GigaScience announces the publication of the whole-genome sequencing and analysis of the Wuzhishan Pig, an extensively inbred, miniature pig, which can serve as an excellent model for human medical research. The Wuzhishan pig provides additional advantages for medical analysis. Its small size makes it easy to handle, and its long history of inbreeding have resulted in a breed of pigs made up of individuals that are genetically identical, allowing greater reproducibility in scientific analyses. The availability of the mini-pig genome provides a wealth of genetic tools that will enable detailed and well thought-out analyses on an animal that shares a substantial number of complex diseases with humans. The work also revealed potentially actionable resources, including the identification of the porcine counterparts of human drug target genes.

To provide the best understanding of the genetics of the Wuzhishan pig, the researchers at BGI in collaboration with scientists from several institutions in China and Denmark, obtained a high quality genome sequence and used this to investigate characteristics that would be of great interest for medical studies. In particular, they looked at genes and protein domains that were the pig counterpart of human genes that are important for therapeutic drug activity. These analyses showed that the Wuzhishan pig genome contained a very large number of similar drug target genes for several types of human disorders, indicating that this pig would serve as an excellent model for drug testing in such cases.

However, researchers also found that there were several situations where target genes showed important differences from the human versions. This information is of great use as well, as it provides a clear indication of the types of drug testing for which this organism is not as useful, saving unnecessary experimentation, time and money.

Lead researchers Dr Yutao Du and Prof Shutang Feng note that "the physiological similarities to humans was maintained at a genetic level with 84 percent homology between the two species. While there was a great deal of similarity in genes known to be involved in coronary artery disease and drug target genes, detailed analysis showed that there were several important differences which need to be taken account of."

The scientists also assessed the presence of viruses integrated into the genome, which is a concern given that pigs have been considered as a possible source of xenotransplantation and thus viruses could be transferred to the human patients through transplantation.

Dr Du and Dr Feng noted that the viral analyses provide tools and information for investigating such concerns by allowing more direct assessment of the risk of transmission. They explained that, "both humans and pigs carry viruses hidden within their genomes. One particular virus, porcine endogenous retrovirus, once activated can infect human cells. However, the genome sequence has revealed that a specific type PER virus (type C) has been lost from the mini-pig."

Overall, the extensive amount of work in these studies serve as a springboard for more economical and directed means of carrying out biomedical analyses and provide new resources for the investigation of economically important traits, domestication events, and the evolution of this group of animals.

In keeping with the scientific community's goals of making the data underlying the analyses used in published research fully and freely available, all data from the Wuzhishan pig genome have been made available in the GigaScience database, GigaDB, in a citable format, and are also available in the NCBI public repositories.