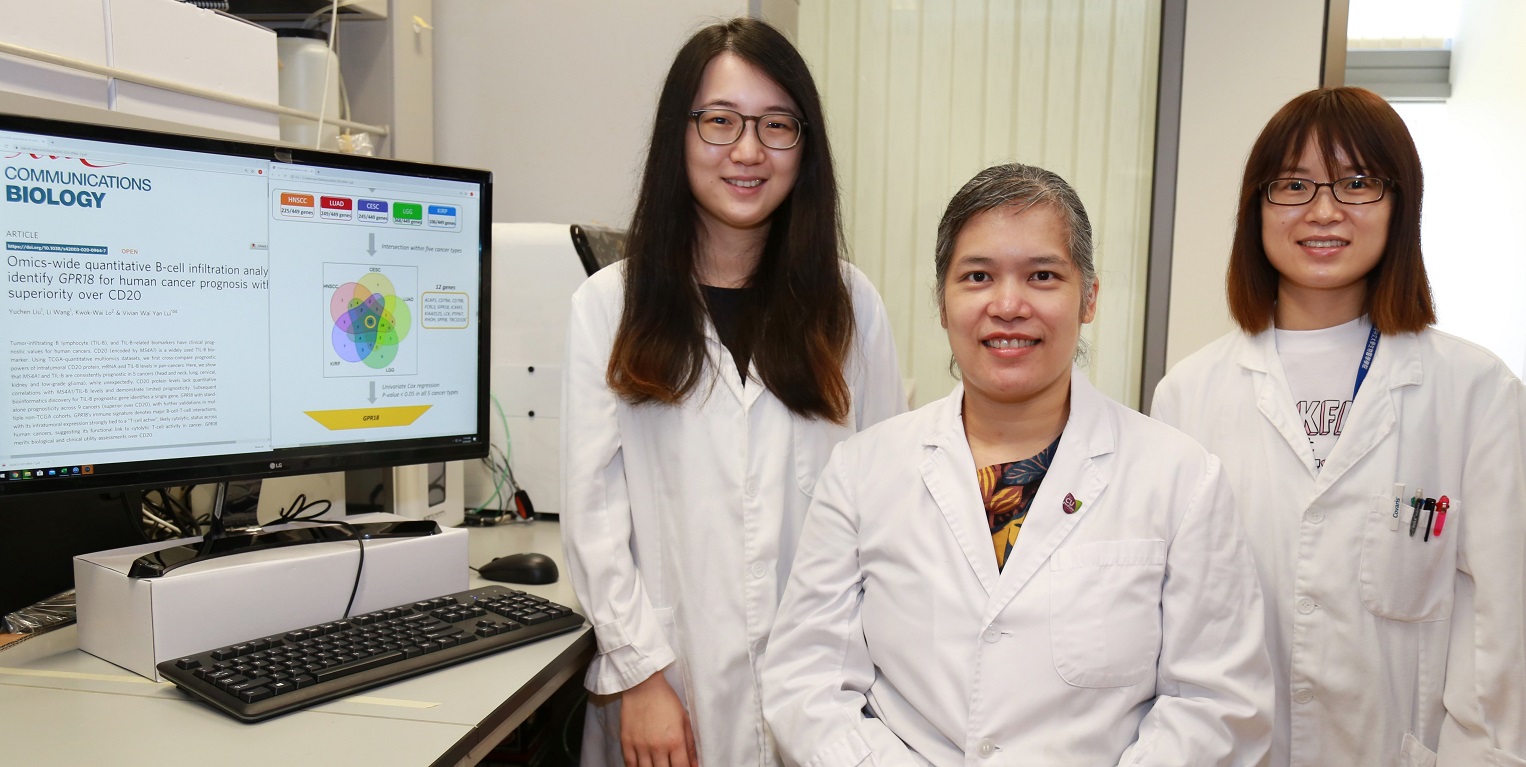 A study, conducted by the Faculty of Medicine at The Chinese University of Hong Kong (CU Medicine), has identified a gene called GPR18 which can be a biomarker to help form the prognosis for a patient in nine cancer types. Prognosis describes how serious a patient’s cancer is and the chance of survival. A genetic biomarker is a clinically useful tool to help estimate the state of the disease. The research team has also provided new insights into B-cells for a cancer patient’s prognosis. The findings were recently published in the international scientific journal Communications Biology - Nature.

B-cells quantity as a prediction for cancer patient survival

Professor Vivian Wai Yan LUI, Associate Professor, School of Biomedical Sciences at CU Medicine, explained,“T-cells role in assisting cancer therapy has been well established in recent decades but the clinical impact of B-cells on cancer patient outcomes has been poorly defined till now.”

The bioinformatics research team led by Professor Vivian Lui, an expert in genomic medicine, has found, after studying cancer genomic and patient survival big data, that the level of B-cells in tumours is linked with the patient’s survival in seven major cancers (lower-grade glioma, diffuse large B-cell lymphoma, thymoma, kidney, lung, head and neck, and uterine cancers). The higher the level, the longer the survival. “This is a novel finding which provides insights into cancer prognosis”, said Professor Lui.

Professor Lui added, “GPR18 demonstrates versatile prognosticity in as many as nine cancer types, which is superior to other existing biomarkers such as CD20. Studies over the past decade failed to come into conclusion on the role of B-cells in human cancer prognosis in many cancer types. Our new findings help to conclude that both B-cell quantity and particularly a B-cell-related gene, GPR18, can serve as clinically useful biomarkers for prognosis in multiple cancers. Furthermore, we have been first to uncover that GPR18-expressing B-cells may be specifically linked to cytotoxic T-cell functions, that is the capacity to kill cancer cells directly. Currently, not much is known about GPR18 in human cancer. Future functional studies of this gene can help us understand how B-cell cooperates with T-cell immunity in human cancer, and affects cancer patient survival in so many cancer types.”

In head and neck cancer alone, the team found that the higher the GPR18 level, the better the survival for a special subsethithhith of patients with human papillomavirus (HPV) infection.