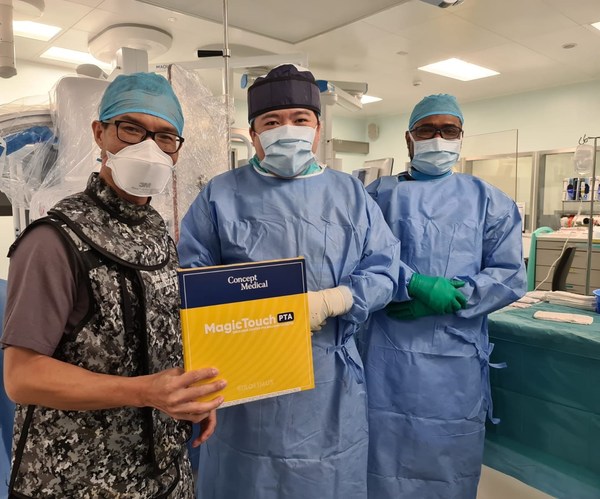 Concept Medical Inc., focused on vascular intervention drug delivery devices, has announced the enrolment of the first patient in the FUTURE BTK trial (Randomized Controlled Trial of First SirolimUs CoaTed Balloon VersUs StandaRd Balloon Angioplasty in The TrEatment of Below The Knee Artery Disease).

The index patient was successfully enrolled on 26th August 2020 in Singapore.

FUTURE BTK is a randomized, double blind, placebo-controlled, multi-center trial. It is aimed at determining the effectiveness of MagicTouch PTA sirolimus coated balloon versus standard balloon angioplasty for the treatment of below the knee arterial disease in critical limb ischemia (CLI) patients.

Treatment of CLI primarily involves revascularization of below the knee arteries using angioplasty. Local drug delivery using drug coated balloons (DCBs) during angioplasty can successfully deliver anti-proliferative drugs to the lesions in the artery, and prevent restenosis. Sirolimus coated balloons are considered to be the next new generation of DCBs, and MagicTouch PTA sirolimus coated balloon offers a solution which optimizes both the deliverability and the absorption of sirolimus into the vessel wall.

The principal investigator of FUTURE-BTK is Associate Professor Edward Choke from the Department of General Surgery (Vascular Surgery) at the Sengkang General Hospital, Singapore.

He added, "The novel MagicTouch PTA sirolimus coated balloon has emerged as one of the most promising transcatheter technologies in preventing restenosis for below-the-knee lesions. The earlier data on the efficacy of MagicTouch PTA from small studies are encouraging but these need to be confirmed or refuted. I look forward to the FUTURE BTK randomized controlled trial, which will test whether the MagicTouch PTA sirolimus coated balloon can improve the patency of below the knee arteries in CLI patients, and this will hopefully bring us closer to our goal of reducing leg amputations."

The trial is designed to follow a rigorous blinding protocol in order to minimize bias. Patients, care providers, investigators and outcome assessors, including vascular technologists performing the duplex ultrasound, will be blinded to the treatment allocations. The patients will be followed up for two years.