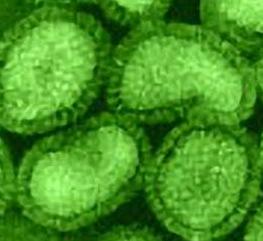 Chinese researchers have developed the world's first ever vaccine against a strain of enterovirus that can cause hand, foot and mouth disease

Singapore: The world's first vaccine against a strain of enterovirus has now been developed by Chinese researchers. The enterovirus that can cause hand, foot and mouth disease, especially in small children can also lead to deadly infections of the brain and spinal cord membranes.

The disease can be caused by several different germs, including a group called enterovirus and a specific form of this virus called the enterovirus71 (EV71). EV71 can cause sever disease in children that causes fever, blisters around the hands, feet and mouth and is transmitted by contact with fecal matter, blisters or saliva of an infected person. It sometimes leads to potentially fatalmeningitis and encephalitis.

First published in The Lancet, the research shows that the new vaccine protects against EV71. The study involved 10,245 children aged between six and 35 months who lived in four different places in China. Half were given two doses of the vaccine and half were given a placebo.

The vaccine also demonstrated 100 percent efficacy against EV71-associated hospitalization, further suggesting, "It could have a significant impact on public health by preventing severe outcomes of EV71 infection," the authors added.

Warning that even though the vaccine has a high efficacy for preventing EV71-associated hand, foot and mouth disease, it might play a small part in reducing the overall incidence of hand, foot and mouth, even by universal mass immunization of children.

Claiming that this new finding was very exciting, Dr Robert Booy, Professor and Head of Clinical Research at the National Center for Immunization Research and Surveillance at the University of Sydney addressed the prevention of EV71 infection and its potentially life-threatening manifestations like encephalitis.

"This virus has caused a fairly severe outbreak in the Sydney metropolitan region over the past six months, with many children admitted to hospital, some with life-threatening disease. A very high level of protection is demonstrated by this study in the short term (about a year follow up) and it will be important to determine longer-term protection," he said.