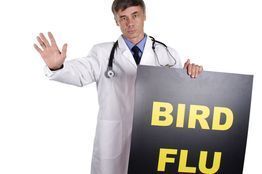 Singapore: Medicago, a biopharmaceutical company focused on developing highly effective and competitive vaccines based on proprietary manufacturing technologies and virus-like-particles (VLPs), has reported positive interim results from a preclinical trial for an H7N9 avian influenza VLP vaccine candidate (H7 vaccine). The data show that three micrograms of the H7 vaccine administered with and without adjuvant induced high antibody titers after one dose.

"These results are very significant as there is a general concern that H7 vaccines will be of low immunogenicity in humans should a pandemic be declared. However, our results indicate that our plant-based H7 vaccine is able to generate a high immune response in animal models. To our knowledge, this is the first report of preclinical results for an H7 vaccine developed for the recent H7N9 virus, further demonstrating that Medicago is well positioned to be a first responder in the face of a pandemic," said Mr Andy Sheldon, president and CEO, Medicago.

"This is an important first step in our H7N9 program. Previous H7N3 and H7N1 avian vaccines derived from eggs have been tested in humans without achieving significant antibody levels even at doses as high as 2x90 micrograms or 2x24 micrograms mixed with alum. Previous vaccines from other technologies also induced very low antibody levels in the mouse model, whereas Medicago's results indicate that our H7 vaccine developed for the emerging H7N9 strain elicits a solid antibody response in mice after a single dose," said Ms Nathalie Landry, VP, product development at Medicago.

The plant-made H7N9 vaccine was developed for the H7N9 virus that is responsible for the recent influenza outbreak in China that killed 37 of the 133 reported cases as of May 29, 2013. The first vaccine lots were available at Medicago on May 9, only 19 days after Medicago had received the DNA gene from the DNA sequence in GISAID EpiFlu Database. This emerging H7N9 strain causes a lot of concerns to the vaccine community as it is rapidly evolving being a very few mutations away of being fully transmissible to humans. Moreover, it has been shown to be transmissible between ferrets under certain conditions. Contrary to highly pathogenic H5N1 viruses, this H7N9 virus does not kill the bird population limiting the ability to control the source of infection.

The H7N9 vaccine contains the adjuvant component, GLA (glucopyranosyl lipid A). This is a novel synthetic TLR4 agonist that is supplied by Immune Design. GLA has been shown in multiple pre-clinical studies and in over 700 human subjects to be a safe and potent activator of humoral and cellular Th immune responses. In clinical trials it has been shown to be immunogenic, provide dose sparing features, and cross protection against drifted influenza strains.