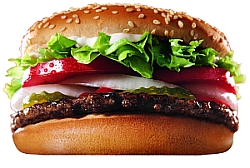 Making of the world's first 'test-tube burger' - Researchers have grown meat in their lab, which will be made into a burger by an anonymous London restaurant

Singapore: Researchers at Dr Mark Post's laboratory in the Netherlands have grown nearly five oz of meat in their lab and have given it to an anonymous London restaurant for making it into the world's first "test-tube burger". The meat has been grown in a laboratory for nine weeks at a cost ranging from $325,000 to $385,000. Dr Post is a professor of vascular physiology at the Maastricht University and professor of angiogenesis in tissue engineering at the Technical University Eindhoven.

Although The Guardian announced a similar event last fall but Dr Post was not satisfied with the texture and taste at that time. This time the burger will be made from 20,000 strips of lab-grown meat tissue combined with lab-grown animal fat. The funding behind the designer burger was provided by the Dutch government as well as a wealthy donor who prefers anonymity.

Working with a team of six, Dr Post first extracted muscle stem cells from a cow's neck through a biopsy procedure and carefully cultivated them in petri dishes. There, the cells were bathed in a cow fetus serum medium that help them grow into proper strips of muscle. Dr Post told the New York Times that at this point, they looked "something like a short pink rice noodle."

Following this, the strips were stretched across a fabricated scaffold and then they were flexed, contracted and subjected to electric current to promote growth. When they attained the necessary bulk, the strips of muscle will be minced along with laboratory-fabricated fat and formed into a hamburger, ready for the grill.

Dr Post told The Guardian that synthesizing meat in this way means that scientists could produce meat with a particular texture or level of fatty acids. In short, they could design the meat as consumer tastes demand. Dr Post added, "Meat demand is going to double in the next 40 years and right now we are using 70 percent of all our agricultural capacity to grow meat through livestock."