ENHERTU Approved in the U.S. for HER2 Positive Unresectable or Metastatic Breast Cancer Following Two or More Prior Anti-HER2-Based Regimens 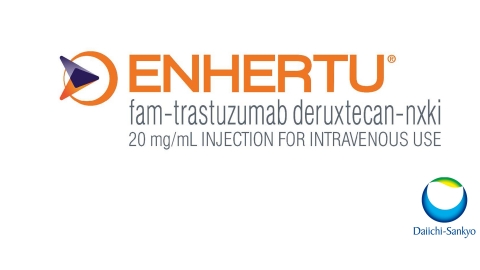 Daiichi Sankyo and AstraZeneca have announced that the U.S. Food and Drug Administration (FDA) has approved ENHERTU® (fam-trastuzumab deruxtecan-nxki), a HER2 directed antibody drug conjugate (ADC), for the treatment of adult patients with unresectable or metastatic HER2 positive breast cancer who have received two or more prior anti-HER2-based regimens in the metastatic setting. This indication is approved under accelerated approval based on tumor response rate and duration of response. Continued approval for this indication may be contingent upon verification and description of clinical benefit in a confirmatory trial.

ENHERTU is approved with a Boxed WARNING for Interstitial Lung Disease (ILD)/pneumonitis and Embryo-Fetal Toxicity. The safety of ENHERTU has been evaluated in a pooled analysis of 234 patients with unresectable or metastatic HER2 positive breast cancer who received at least one dose of ENHERTU (5.4 mg/kg) in the DESTINY-Breast01 trial and a phase 1 trial. ILD occurred in 9% of patients. Fatal outcomes due to ILD and/or pneumonitis occurred in six patients (2.6%) – two deaths already reported from the phase 1 trial and four deaths already reported in the phase 2 DESTINY-Breast01 trial. Patients and physicians should be aware of ILD/pneumonitis and patients should be actively monitored for potential signs and symptoms. If ILD/pneumonitis is identified, it should be managed as per the FDA approved Prescribing Information. Management may require dose modification or treatment discontinuation and steroid treatment. ENHERTU can cause fetal harm when administered to a pregnant woman. The most common adverse reactions (frequency ≥20%) were nausea, fatigue, vomiting, alopecia, constipation, decreased appetite, anemia, neutropenia, diarrhea, leukopenia, cough and thrombocytopenia.

Patients enrolled in DESTINY-Breast01 received a median of five prior regimens (range: 2 -17) in the locally advanced/metastatic setting. All patients received prior trastuzumab, ado-trastuzumab emtansine, and 66% had prior pertuzumab.

“The approval of ENHERTU underscores that this specifically engineered HER2 directed antibody drug conjugate is delivering on its intent to establish an important new treatment for patients with HER2 positive metastatic breast cancer,” said Antoine Yver, MD, MSc, Executive Vice President and Global Head, Oncology R&D, Daiichi Sankyo. “Since the beginning of our clinical trial program four years ago, we have focused on the opportunity to transform the treatment landscape for patients with HER2 positive metastatic breast cancer, and we are extremely proud of how quickly we delivered ENHERTU to patients in the U.S., as ENHERTU represents one of the fastest developed biologics in oncology.”

“ENHERTU has shown impressive results in women with HER2 positive metastatic breast cancer, with the majority of women benefiting from treatment and the median duration of response exceeding 14 months,” said José Baselga, MD, PhD, Executive Vice President, Oncology R&D, AstraZeneca. “With this first approval, we are proud to bring ENHERTU to patients with high unmet need and we look forward to further exploring its potential in additional settings.”