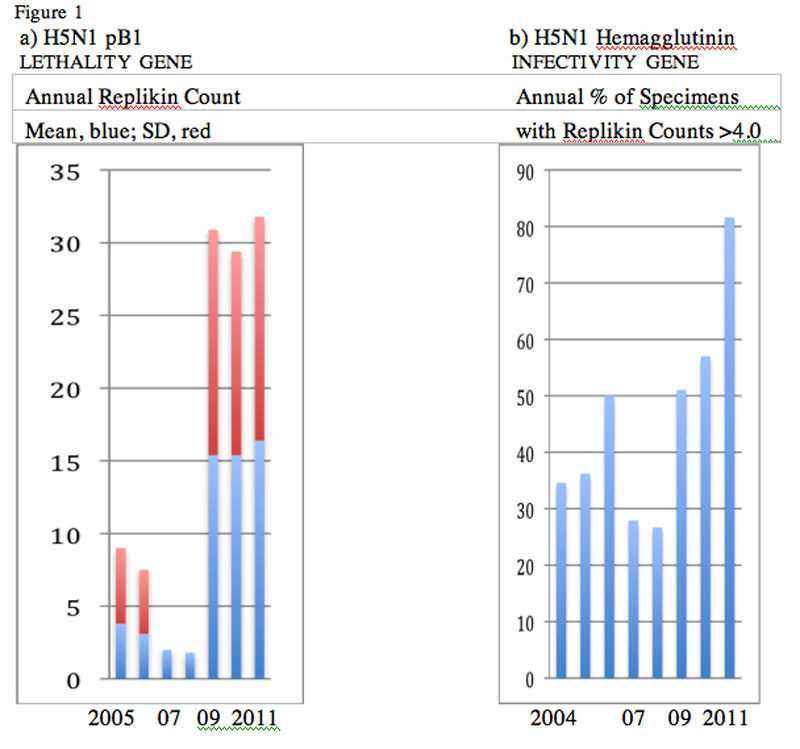 Singapore: A marked increase in the H5N1 pB1 lethality gene replikin count (number of replikins per 100 amino acids) in Cambodia in 2009 (Figure) provided a warning for the outbreaks of the avian flu (H5N1) with human deaths in that country. Eight deaths were reported in 2011 and three thus far in 2012.

This was one of seven consecutive correct predictions by genomic replikins of coming viral outbreaks tied to specific geographical locations. The United Nations Food and Agricultural Organization (FAO) noted that increases in replikin count, have been followed by an outbreak one-to-two years later.

In contrast to the increase in the lethality gene, the replikins infectivity gene was not increased in 2009 beyond the levels in the Indonesia H5N1 outbreaks of 2006, giving hope that the present outbreak might remain limited. However, the evolution of H5N1 has continued. The H5N1 infectivity gene replikin count has increased in Cambodia to the highest recorded percent of sequences with replikin counts greater than four (p<0.001).

High H5N1 infectivity and lethality gene replikin counts in Cambodia are duplicating the time-course of H1N1 Replikins 2006-08 in Mexico, which preceded the 2009 H1N1 pandemic and permitted its prediction from replikin count alone. Further, just as sporadic human deaths due to H1N1 occurred in the pre-H1N1 pandemic years in Mexico, sporadic H5N1 deaths are occurring in Cambodia due to proven H5N1.

Early warning and synthetic vaccines
Because of this early warning system specific to the strain, the genomic replikin structures, and the geographic site, pandemic prevention at a limited geographic site can be attempted now for the first time with synthetic vaccines, and are applicable to the current conserved genomic H5N1 Replikin sequences identified in Cambodia.

Completely synthetic solid phase vaccines, composed of peptides only (and not DNA to avoid the risks of vaccine DNA being permanently incorporated into human genomes), synthesized in seven days, and shipped in freeze-dried form, have been found effective against H5N1 in chickens and against Taura Syndrome Virus in shrimp.