Bangalore is synonymous with Biotech: BIB 2014 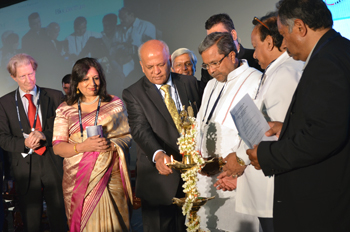 Bangalore India Bio 2014 has been organized by the Department of Information Technology, Biotechnology and Science & Technology, Government of Karnataka and the Vision Group on Biotechnology

Bangalore: The pioneers from the Biotechnology industry gathered at the Bangalore India Bio 2014, as if with a renewed hope, to strike a chord with those who matter in the industry globally.

The event that was inaugurated by the Chief Minister of the State of Karnataka, Mr Siddaramaiah witnessed the presence of over 20 foreign delegations, alongside emerging and established companies, in the field of Biotechnology.

Inviting the audiences that numbered in hundreds, the Ministry of Information Technology, Biotechnology and Science and Technology launched India's first ever biotech and medtech incubator. The Karnataka government arranged for a 3D movie, giving a 360 degree view of the incubator that would be launched within the next two years.

Listing out 12 winning reasons why Bangalore has become synonymous with Biotechechnology, Mr Srivatsa Krishna, secretary, Department of IT, Biotechnology and S&T DPAR (e-governance), Government of Karnataka even described the planned incubator in detail.

Dr Kiran Mazumdar-Shaw, chairperson of the Karnataka Vision group on Biotechnology and CMD of Biocon said in the inaugural speech that the Karnataka government is playing a pivotal role in shaping the biotech industry in the state. "India has such a life science model that can be easily emulated across the world. The Karnataka government with its futuristic policies that brings together the industry, academia and the government has helped the state receive global recognition. Considering that we not only have to feed our increasing young population, but also have to take care of our soon ageing population - technology is going to play a key role," Dr Kiran said at the inauguration. She said that the government should look at investing more in Science and technology to help address the increasing challenges of global health.

Dr Kiran also emphasized that the government would play a major role in shaping the biotech destiny of the country and will help place the industry on the global platform.

The Chief Minister Mr Siddaramaiah said that the Bangalore India Bio 2014, partnered by MM Activ Sci-Tech Communications has helped increase the awareness and participation in the industry.

"The presence of such large number of foreign delegates at this event is proof of what Karnataka is doing in the field of Biotechnology," said Mr S R Patil, Minister for Information Technology, Biotechnology and Science and Technology and Planning & Statistics, Government of Karnataka.
Meanwhile, lauding the efforts of the state in increasing biotech related activities, Nobel Laureate 2012, Professor Sir John Gurdon, Distinguished Group Leader, The Wellcome Trust/Cancer Research UK, The Gurdon Institute, University of Cambridge, UK appreciated the efforts of all involved.