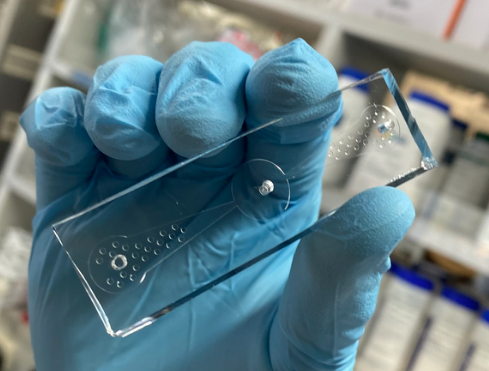 Scientists at Myongji University in South Korea have reported a device that uses tiny worms to detect lung cancer cells. This “worm-on-a-chip” could someday help doctors non-invasively diagnose cancer at an earlier stage.

The team made a chip out of polydimethylsiloxane elastomer that had a well at each end connected by channels to a central chamber. The researchers placed the chip on an agar plate. At one end of the chip, they added a drop of culture media from lung cancer cells, and at the other end, they added media from normal lung fibroblasts. They placed worms in the central chamber, and after an hour, they observed that more worms had crawled toward the lung cancer media than the normal media. In contrast, worms that had a mutated odor receptor gene called odr-3 did not show this preferential behavior.

Based on these tests, the researchers estimated that the device was about 70% effective at detecting cancer cells in diluted cell culture media. They hope to increase both the accuracy and sensitivity of the method by using worms that were previously exposed to cancer cell media and therefore have a “memory” of cancer-specific odor molecules.

Once the team has optimized the worm-on-a-chip for detecting cultured lung cancer cells, they plan to move on to testing urine, saliva or even exhaled breath from people.