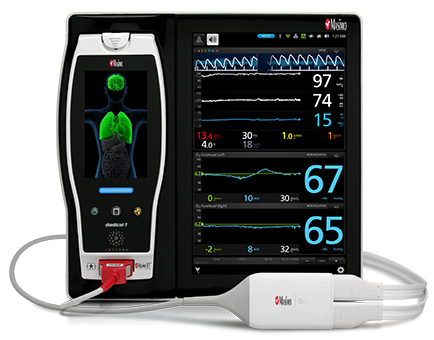 Masimo announced the results of a prospective observational study published in Critical Care. Researchers in the northern Italian city of Genoa investigated the effects of various rescue therapies on the systemic and cerebral Examined oxygenation of mechanically ventilated COVID-19 patients with acute respiratory distress syndrome (ARDS). To measure the effects, the researchers used the Masimo Root ® patient monitoring and connectivity platform with regional oximetry O3 ®, which uses near-infrared spectroscopy (NIRS) to monitor tissue oxygen saturation (rSO2) in the target area such as the brain.

Dr. Chiara Robba and colleagues noted that "neurological complications are common in mechanically ventilated critically ill patients with COVID-19 and may result in impaired cerebral hemodynamics," and that respiratory rescue therapies "can have deleterious effects on brain physiology". However, with limited data currently available on the effects of rescue therapies on the brains of these patients, and particularly on cerebral oxygenation, researchers attempted to assess the effects of various rescue therapies with assisted ventilation on the brain to help clinicians help select the most appropriate therapies for their COVID-19 patients.

The rescue therapies examined were recruitment maneuvers (RM), prone position (BL), inhaled nitrogen monoxide (iNO) and extracorporeal carbon dioxide removal (ECCO 2 R). To assess the effects, researchers measured arterial oxygen saturation (SpO2), oxygen partial pressure (PaO2), carbon dioxide partial pressure (PaCO2), and cerebral oxygen saturation (rSO2) (before and after using each method ). The rSO2 was determined using Masimo Root with O3, which also made it possible to measure some additional parameters that are unique for Masimo O3: ΔO 2Hb, which observes the relative changes in the oxygenated hemoglobin component of rSO 2 ; ΔHHb, which observes the relative changes in the deoxygenated hemoglobin component of rSO 2 ; and ΔcHb, which observes the relative changes in total cerebral hemoglobin or blood volume. As a secondary goal, the researchers tried to evaluate the relationship between systemic and cerebral oxygenation.

The researchers concluded that the four rescue therapies had different effects on cerebral oxygenation and the other parameters measured. In particular, they found that although there was no significant change in PaO 2 or PaCO 2 after an RM, there was a significant decrease in rSO 2,

The researchers concluded that Rescue therapies in critically ill COVID-19 patients exert certain pathophysiological mechanisms affecting systemic and cerebral oxygenation. A rescue strategy should monitor and benefit both lungs and the brain

The most important goal of improving blood oxygen levels is to supply oxygen to vital organs, the most important of which is the brain. Masimo O3 assists clinicians to assess the impact of any medical intervention aimed at improving oxygen delivery which is linked to hemoglobin O3.