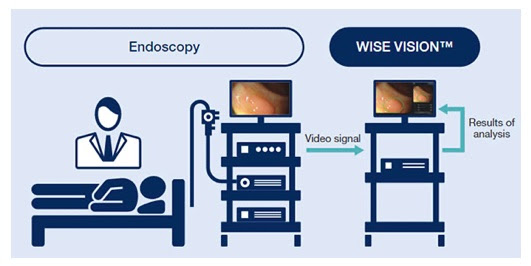 NEC Corporation, a Japanese multinational information technology and electronics company, has announced the development of "WISE VISION Endoscopy," an AI diagnosis-support medical device software for colonoscopies, which is being released in Japan and is expected to soon be available in Europe.

This software connects with existing endoscopy equipment as part of using AI to automatically mark potential lesions from images taken during endoscopic procedures.

Colorectal cancer is the most common cancer in Japan, and the second most common in Europe. Colorectal cancer originates from precancerous lesions (colorectal neoplastic polyps) and it is possible to suppress the progression to cancer by detecting and removing lesions at the polyp stage during endoscopy procedures. However, polyps need to be found with the eye of an endoscopist, and are often difficult to detect because of their size and shape, causing approximately 24% to be missed, thereby delaying detection.

NEC has been working with the National Cancer Center Japan since 2016 to contribute to resolving this issue. NEC has now developed software that can automatically mark potential lesions based on the use of AI to learn from endoscopic images of more than 10,000 lesions, as well as learning from the observations of expert physicians. This software was developed by applying NEC's AI technologies, "NEC the WISE," and its face recognition technology, which is highly evaluated by the National Institute of Standards and Technology in the United States.