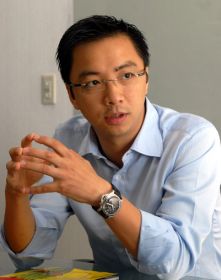 Taiwan Liposome Company is a specialty pharmaceutical company with a proprietary drug delivery technologies based on a lipid formulation platform. The company, founded in 1997, has its eyes set on both the western markets and the Asia Pacific markets. It has a range of products that suit the needs of the different markets.

TLC has won a number of awards for its R&D and innovation. In an interview with BioSpectrum Asia, Mr George Yeh, president, TLC, talks about the plans to take the company forward and spread wings abroad. Mr Yeh earned his BA from the University of California at Berkeley and his MA and MBA from the University of Michigan at Ann Arbor. He has been hailed as an outstanding young innovator by the Ministry of Economic Affairs, Taiwan.

TLC signed a collaboration agreement with Teva in March 2012? Are there other such collaborations in the offing?

We've out-licensed the distribution right of our generic cancer products for the US territory to Teva, with other territories currently under negotiation. Several multinational pharmas are also approaching TLC for collaboration opportunities of our other products. Details will be announced shortly once deals are confirmed.

Brief us about the latest R&D work happening in TLC?

TLC has always been a very focused company, specializing in the development of products and platforms along the line of "Lipid-based Drug Delivery Systems". We have developed five technology platforms that can encapsulate different sized molecules for different release profiles ranging from minutes to months, and we have applied the technology platforms in developing six products along the "super generic", "new formulation" and "NCE" categories.

We have also ventured into the delivery of large molecules in recent years with our ophthalmology product, prolonging the administration frequency from once-a-month to once every 4-6 months, and this sustained release technology platform can be used in both small and large molecules.

How does the company plan to penetrate the market?

Tell us about your businesses in Asia Pacific?

We have already launched an oncology product, Lipo-Dox, in Taiwan since 2002; and partnered with the biggest pharmacy chain in Japan and one of the top five pharmas in Korea for our super generic product ProFlow, and we're currently in the final stage of negotiation for the out-licensing of the distribution rights of ProFlow for the Greater China territory.

What are the future growth plans of TLC?

Taiwan is a small country with limited means and exposure. TLC is headquartered in Taiwan, with plans to expand operations to China and Japan by setting up subsidiary offices for the ease of penetrating into the market and be more familiarized with the local regulatory changes. We position ourselves as a specialty biopharmaceutical company focusing on lipid-based drug delivery technologies in injectable drugs.

We are hoping to establish ourselves in the global arena for further development and collaboration opportunities.