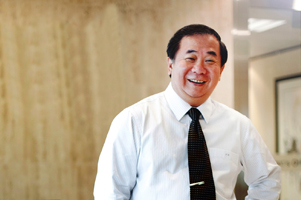 Singapore: Prof. Freddy Boey, Deputy President at Nanyang Technological University, is credited for rendering his scientific research into commercialized products and getting Singapore recognized as an emerging hub for medical device innovation.

Professor Freddy Boey is Provost at Nanyang Technological University (NTU) and was previously the Chair of NTU's School of Materials Science and Engineering. Prof. Boey has developed a fully biodegradable cardiovascular implant that helps to plug heart defects like a hole in the heart. His hole-in-the-heart plug is a fully biodegradable device that has been shown to work in animals, and it is being tested in human trials. The research work involve cellular - biomaterials interface and interaction, synthesis of elastomeric biodegradable polymers and drug / peptide eluting implants for stents and "hole in the heart" plugs.

Prof. Boey is engaged in extensive research on functional biomaterials for medical devices, nanomaterials and nanostructures for cell regeneration, sensing and energy storage. A recent invention by Prof. Boey is customizable hernia mesh that lowers the risk of inflammation and infection. Prof Boey has also developed an injectable nano-liposome based device to treat Glaucoma. Developed in collaboration with Singapore Eye Research Institute, the research involves development of drug eluting microspheres and film inserts for retina infections and macular degeneration glaucoma.

A keen inventor, Professor Boey has founded several companies with his many patents to commercialize his cardiovascular and surgical implants. Some of his inventions, like the surgical tissue retractor, has been sold in the US, Europe, Japan, Middle East and India and the customizable hernia mesh, got approved for sale by the FDA.