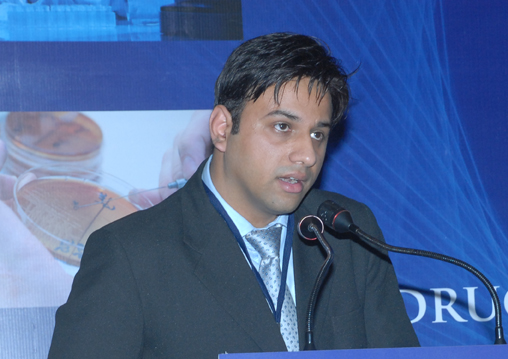 Mr Sahil Kapoor, one of the founders of Novo Informatics

Drug pricing pressures, stricter regulatory environments and the economic downturn are all pushing the global pharmaceutical sector to look for better ways to develop drugs with higher efficacy to cover the costs of research and development, while also meeting the shareholders' expectations. As a step further in that direction is Novo Informatics, a life sciences R&D spin-off from the Indian Institute of Technology (IIT), New Delhi. The newly launched company uses computational biology to develop tools for drug development.

With only few thousand rupees as seed money, Novo Informatics was incorporated in April 2011 by four students - Sahil Kapoor, Avinash Kumar Mishra, Shashank Shekhar and Madhup Benawat - under the guidance of Professor B Jayaram, head, supercomputing and chemistry dept at IIT Delhi. The team built upon proprietary technologies from the IIT. In a short span of time, they have created a virtual molecule library of over a million drug-like molecules that is allowing the company to come up with lead molecules in projects. The team has also designed a pipeline plot to enter the pharmaceutical market within the next two-to-three years by providing consultancies to companies in molecule discovery.

Talking about the relevance of computational biology, Mr Sahil Kapoor, director and co-founder, Novo Informatics, says computational drug discovery is a "like a magical wand from which innovations can be extracted". "In phase I (1-2 years), we planned to cover various companies and research academies to create brand value before launching our product in the market. We undertook small projects as consultants in first year and covering areas of in silico drug discovery. We knew that at a later stage, we need to set up experimental infrastructure in order to validate molecules designed by us. Keeping this in mind, we set up business relations with small companies having facilities for undergoing bio assay validations on designed molecules."

The company has already touched a certain milestone in terms of revenues and managed to get projects from various international pharmaceutical companies and research institutes. In the first year, the company grabbed three international clients seeking consultancy on drug discovery. It has successfully completed two projects and is likely to come up with a novel molecule in the market soon. It has now submitted a research proposal to government agencies for internal R&D projects. Recently, the company also set up a facility in National Capital Region for synthesizing molecules and undergoing bio assay validations in collaboration with an international partner. On securing rights over new molecules, Mr Kapoor elaborated, "Each novel molecule is a new business these days, so we carefully focus on generating IP on molecule that we design for various companies."

Satisfied with its progress, the company has invested 60 percent of revenue in developing products that will be launched in 2013. The company will be soon offer a complete package starting from in silico molecule discovery to validated hit molecules. Based on the need of the global market, the team is carefully designing small packages that will come up as a complete package in the form of innovative products for companies and research academics. The research pipeline is solely based on drug discovery covering areas such as in-silico package that includes target modeling, virtual high-throughput (v-HT) screening, scaffold designing, hit identification and hit to lead improvement. The wet lab package includes molecule synthesis, bio assay-based hit identification and hit to lead optimization. Besides, it is looking at facilitating its in-house R&D projects against selected targets.

Novo Informatics has already developed successful scientific and business partnerships with various companies and research academics. Partners include Super Computing Facility for Bioinformatics & Computational Department (SCFBio), IIT Delhi and Kusuma School of Biological Sciences at IIT Delhi. The company is now planning to set up some international partnerships with research labs through which we can bring some innovations in our research pipeline.

Mr Kapoor said currently they have a few R&D proposals pending with government funding agencies. "We are hoping to ignite our internal R&D project on cancer in collaboration with the funding agencies," he says, adding "Our primary goal is to become leading drug discovery company from India by setting up a complete infrastructure including in silico as well as experimental discoveries."