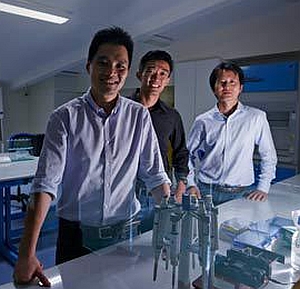 Dr Johnson Ng dedicated his research developing innovative platforms for polymerase chain reaction (PCR)-based diagnostic for 10 years and was successful in developing rapid point-of-care diagnostics of infectious diseases, which is a bead-based microarray technique. For this he has been accredited with four patents. While pursuing his PhD degree from the National University of Singapore (NUS), Dr Ng always wanted to develop a PCR that is much faster than the existing technologies and could be available to the researchers at much affordable price.

After obtaining his doctoral degree, Dr Ng conceptualized the idea of developing a digital PCR technology during his tenure with a Singapore-based medical technology company. His idea was to develop a quick PCR, which was 80 percent faster than conventional PCRs, and a technology to look forward for faster genome analysis. Sensing a promising potential in the technology conceived by Dr Ng, Dr Meng-Han Kuok, founder of Camtech Management, an incubator of early-stage technology start-ups in the fields of microfluidics, lab-on-a-chip, wireless sensing and biotechnology, came up the idea of starting a company for commercializing the technology and formed JN Medsys in 2010.

About the digital PCR
PCR is a method for amplifying a specific fragment of DNA into billions of copies and is one of the most widely used and sensitive method for DNA detection. Dr Ng developed a digital PCR embedded with a technology for detecting DNA with extremely high sensitivity and precision.

Highlighting the technology of his digital PCR, Dr Ng explains, "It functions by partitioning a typical PCR reaction into thousands of nanolitre sub-reactions such that each has at most a single copy of DNA. By counting the number of positive reactions after PCR, the number of copies of DNA present in the sample can be directly enumerated. Until now, quantitative PCR (qPCR) is a normal standard in many diagnostics applications. However, this emerging digital PCR method provides advantages over the qPCR."

Quantiative PCR allows DNA sample in the reaction to be quantified, however, it requires use of a reference of a known amount. By comparing the real-time amplification kinetics between the unknown and known sample, the amount of the former is determined. In dPCR, the amount of unknown DNA sample can be quantified by directly counting the number of positive sub-reactions after the PCR. This is achieved without having to monitor the amplification real-time, which is a necessity in qPCR.

He explains, "Digital PCR comprises of three key steps. First, the sample is partitioned into smaller sub-reactions. Once the partition is done, the sub-reactions undergo amplification similar to a typical PCR process. After amplification, the sub-reactions are interrogated to determine if they are positive or negative for PCR products. Due to the new technology of digital PCR of partitioning the sample in a way that only a single copy of DNA is present in each sub-reaction, the method is more sensitive and precise than a standard a PCR."
Dr Ng mentions that his digital PCR could play an extremely important role in serious disease diagnostics like cancer and detection of rare mutations.

An entrepreneurial move
Dr Ng shares that being a researcher he initially lacked the acumen of an entrepreneur but his experience in the involvement of starting up a medtech company in Singapore exposed him to learn the tricks of the trade. Owning a sound technology of a digital PCR, Dr. Ng was awarded SPRING Singapore's Technology Enterprise Commercialization Scheme (TECS) Proof-of-Concept grant has successfully got two rounds of funding of around $250,000 and $500000.

"While doing PhD, I did not have much skills of being an entrepreneur but my experience of working for three years with a local company gave me confidence and skills to start my own company," he mentions.

The road to entrepreneurship was not an easy task for Dr. Ng as he faced the challenge of limited sponsors in the industry. "It involves big money for developing a technology, hiring quality researchers and manage the entire project, so we had to control the price flow in a very strategic manner," remembers Dr Ng.

The company is currently managed by a team of five people including Mr Koon Kiat TEU as the R&D director and Dr Meng-Han Kuok as the director of the company. Dr Ng is looking for collaborators to further invest in the technology and plans to do a big scale launch of the product by 2015.

Our digital PCR takes less than two minutes to analyze a sample whereas a standard PCr takes more than 30 minutes and hence the recurring cost gets much cheaper in long run.

Dr Ng is looking at US and China as his most potential market where most of the genetic analysis research is being done. Making a broader presence in western market, Dr Ng plans to start a direct operation in US in the coming years by deploying a team in the country.

Johnson has 10 years of experience developing innovative platforms for nucleic acid testing and PCR-based diagnostics. Prior to founding JN Medsys, he was project manager and pioneering staff at local biomedical device start-up Biochip Devises, where he helped build the company up from scratch and co-invented a device for rapid point-of-care diagnostics of infectious diseases. He is inventor of four patents. As part of his doctoral thesis, he invented an addressable bead-based microarray technique that is now being commercialized by Ayoxxa, an NUS spin-off company.