There must be another way'- thought iPS cell guru Shinya Yamanaka 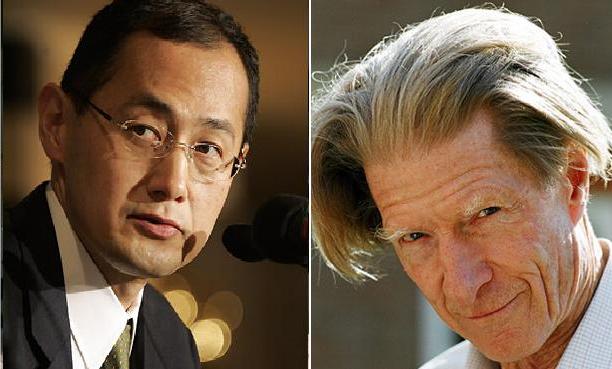 "When I saw the embryo, I suddenly realized there was such a small difference between it and my daughters. I thought, we can't keep destroying embryos for our research. There must be another way," this was Dr Shinya Yamanaka, a father of two, in an interview in The New York Times in 2007.

These words of Dr Shinya Yamanaka, the winner of Nobel Prize for Physiology or Medicine in 2012, sum up the reason that inspired him to discover that adult skin cells can be reprogrammed into embryonic-like stem cells. The discovery, a revolutionary work in the field of stem cell research, gave an alternative to using human embryos for growing stem cell, allowing researchers to side-step the ethics debate related to the use of embryos and heralded a new era of research into regenerative medicine.

Dr Yamanaka, director of Center of iPS Cell Research and Application, Kyoto University, Japan, shared the Nobel Prize with British researcher Sir John B Gurdon who established the principle of gene conservation in differentiated cells. Sir Gurdon's work was published in 1962, the year Dr Yamanaka was born in Osaka, Japan. Half a century later and taking forward the work started by Sir Gurdon, Dr Yamanaka achieved a technological feat in 2006 when he and Dr Kazutoshi Takahashi generated what they named induced pluripotent stem cells or iPS cells by introducing four genes (now referred to as the Yamanaka factors) into mouse fibroblasts, which are a kind of connective-tissue cell (in this case, they were skin cells). They repeated the same feat with human cells, reprogramming adult skin cells into iPS cells that are comparable to human embryonic stem cells.

Dr Yamanaka, who is also a senior investigator at Gladstone Institutes in San Franscisco, California, US, described a modified protocol for generation without the c-Myc retrovirus, which is capable of forming tumors. Later he used this protocol to generate virus-free iPS cells in 2008. In another breakthrough in July of 2012, Dr Yamanaka's laboratory at Gladstone Institutes provided an insight into how iPS cells develop and proved that environmental factors critically influence their growth. This is a significant step towards using stem cell-based therapies for combating diseases.

"I will bring this technology to clinics. I really want to help as many patients as possible. As you may know, I started my career as a surgeon 25 years ago. But it turned out that I am not talented as a surgeon. So I decided to change my career, from clinics to laboratories. But I still feel that I am a doctor, I am a physician, I really want to help patients," said Dr Yamanaka after he was named the winner of Nobel Prize for Physiology on October 8, 2012.

Dedicated to a life of research

On various instances, Dr Shinya Yamanaka has mentioned that he gave up a career as an orthopedic surgeon to pursue his interest in research. But his landmark discovery of iPS cells resulted from some unexpected results in a research project on finding ways to lower 'bad cholesterol'. He joined the laboratory of Dr Tom Innerarity at Gladstone Institutes.

At Gladstone, his initial research led to him identifying an enzyme called APOBEC-1, which shortens the apoB protein (the principle component of bad cholesterol) in the intestines, making it less harmful. Dr Yamanaka and other scientists at the lab thought that by activating the APOBEC-1 enzyme in the liver, they could mimic the intestinal process to create a shortened apoB protein. But even though the experiments on mice showed reduction in the level of cholesterol, the mice developed liver cancer as a side-effect. The cause was found to be a dysfunctional NAT-1 protein.

This failure pushed Dr Yamanaka towards research on stem cells when he needed a genetically modified mouse that lacked the NAT-1 protein to further his work. He moved back to Japan during this time and started working on a project to identify genetic factors that allow embryonic stem cells to become other types of cells. This work finally led him to his breakthrough discovery in 2006 and 2007.

"Dr Yamanaka's stunning discovery has altered our understanding of cell biology and stem cell research," said Dr R Sanders Williams, president of the Gladstone Institutes, where Dr Yamanaka is a senior investigator. "His iPS technology has opened new prospects for drug discovery, personalized medicine and tissue regeneration. His dedication, creative genius and cross-disciplinary approach to science - nurtured during Dr Yamanaka's postdoctoral training at Gladstone - have given researchers around the world new tools to search for solutions to a host of relentless illnesses, including those on which Gladstone focuses: diseases of the heart, diseases of the brain and diseases caused by deadly viruses."

According to recent news reports, scientists at Japan's Riken Center for Development Biology in Kobe are already planning to use the pioneering technology in a clinical trial among patients with macular degeneration, a disease in which the retina becomes damaged, resulting in loss of vision. This would be the first time that iPS cells will be used for the purpose instead of embryonic cells.

A push for regenerative medicine

His quest to bring therapeutic benefits to the patients is on. "Winning the prize would be not only a tremendous honor for me, but also a powerful encouragement for myself, my colleagues, and all the scientists working with iPS cells to continue research activities," he said, reacting to the announcement by the Nobel Prize Committee. "I will work harder with my colleagues to develop effective drugs and new therapy for intractable diseases using patient-derived iPS cells."

His message on the CiRA website also reflects the energy and enthusiasm he brings to the field. To quote his own words from the message: "In the current fiscal year, we are concentrating on our second goal, the generation of iPS cells for use in regenerative medicine. To this end, I myself was appointed in April to the position of director of the Facility for iPS Cell Therapy (FiT), a cell processing center. The task of FiT is to prepare clinical-grade iPS cells that meet the criteria laid down by the Japanese government and to evaluate first whether they are suitable for use in transplantation. When their safety has been confirmed, cells will be passed for actual use in clinical research. Working together with the iPS Cell Therapy Promotion Office, which we set up in February, and with other researchers, we aim to generate iPS cells for use in regenerative medicine."

Even as the world is in awe of his achievements, there is more to him that meets the eye. Dr Yamanaka, who played rugby and practiced judo as a university student, now runs marathons to support the cause of iPS cell research. He also has a well-populated Wikipedia page. He participated in the inaugural Osaka marathon as a charity runner and completed the run in 4:29:53. He also took part in the Tokyo marathon this year and is scheduled to run in the second Osaka marathon in November this year.