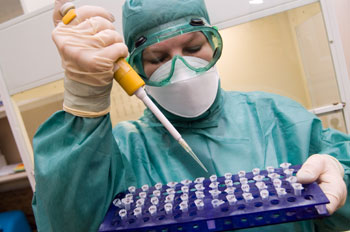 Sample preparation is a daily function in any life science research or drug discovery lab and pipetting is a fundamental step in this process. Almost every experiment requires the transfer of small and precise volumes of liquid from one container to another. Unfortunately, properly seated and sealed pipette tips are a common challenge, with air leaks, causing tips to loosen or fall off in the middle of protocols. This leads to inconsistent or unreliable research results, and ultimately degrades overall efficiency.

The ideal solution is for the pipette and tip to form an airtight seal resulting in improved accuracy and precision. Combined with proper ergonomics that reduces the force required to attach and detach tips, this ideal solution would increase confidence in result reproducibility.

Friction sealing system
Air displacement pipettes are the most common type of pipettes in the lab. Its technology is based on a piston assembly moving in a single orifice cylinder known as the tip cone. An airtight seal between the pipette's tip cone and the tip is crucial for the pipette's functionality. Any compromise on the sealing affects pipetting performance. Most pipetting systems utilize friction-based tip attachment systems where the tip is attached and sealed to the tip cone by friction. Pipettes with a friction seal system rely on a user's force to attach tips to the pipette, which varies from user to user. Attaching the tips with the same force every time is challenging, which is extremely subjective and can lead to unreliable sealing. To minimize the risk of tips getting loose or falling off, researchers often over-tighten the tips. Using extra force requires increased tip ejection force which can lead to adverse ergonomic conditions, especially on a multichannel pipette where the force can be 8 to 16 times the ejection force of a single channel pipette.

Innovative interlocking clip technology
A new pipetting innovation, ClipTip interlocking tip attachment technology, overcomes many of the obstacles of traditional friction-based systems. With this new technology, the attachment of tips is accomplished with an interlock technology between pipette and tip. Its design is based on flexible clips being distributed evenly around the upper edge ring of the tip. The force needed to attach the ClipTip interlocking tip is equal to the force needed to open the three flexible clips, not requiring friction to keep the tip sealed on the tip cone.

Due to this unique technology, the tips are attached and ejected with minimal force. During attachment the tip fitting shape opens the clips, and the clips pass over the fitting flange and return to closed position. The clips lock the tip behind the flange creating a complete seal with the sealing ring. In addition, the lock ensures the seal will not be compromised by the tips loosening, or fall-off during use. Tip ejection is achieved by opening the clips with the clip opener mechanism. After the clips have opened, the ejection mechanism pushes the unlocked tip off from the tip fitting.

Design benefits
The ClipTip interlocking tip attachment system provides an easy method to use correct attachment force for tips. Each time ClipTip pipette tips are on, there is an audible "click" sound to signal the tip is properly sealed. This design reduces user-to-user variation compared to friction-based systems. With the interlock ClipTip technology, users do not have to worry whether the tip attachment force applied is high enough to keep the tips attached through the entire assay. The seal will last for as long as the tips are attached to the pipette regardless of application or touch-off pressure (e.g., tip touching to container wall to wipe off outside droplets).

Since the tips are locked with the clips they are always attached with the same force. Tip ejection of the ClipTip interlocking system can require less than half of the force required for conical tip fitting system. If a sufficient force level is not reached during attachment, the ClipTip tips remain in the tip rack, making it impossible to perform an assay with loose or leaking tips. This ensures that there is no risk for intermediately attached tips to fall off during use to waste valuable samples and time as is the case with other systems.

The ClipTip interlocking clips maintain the sealing force with the sealing ring. The tip fitting is acid resistant AISI 316 steel, which is a commonly used material in appliances where corrosion resistance is needed (e.g. chemical and petrochemical industry). The material is both mechanically durable and chemically resistant. The probability of sample contamination by metal ions from the tip fitting during intended use is infinitesimal as there is no liquid contact to metal The sealing rings are FVM fluoro silicone (tip fitting sealing ring) and EPDM rubber (other sealing rings), which are commonly used sealing materials.

Repetitive strain injury
Interlocking clip technology can also mitigate repetitive strain injury (RSI) common with the thumb, fingers and wrist during daily pipetting. Research has shown that repetitive working movements are connected with upper limb strain injuries, or pain symptoms in the forearm, wrist and hand. Pipetting has been identified as a source of exacerbated upper limb symptoms, especially if performed for over 300 hours per year, according to a report titled 'Hand and shoulder ailments among laboratory technicians using modern plunger-operated pipettes. Applied Ergonomics 1994 ' by BjÃ¶rksten MG, Almby B, Jansson ES.

An optimal pipette and tip system increases confidence in reproducibility, reduces forces required to attach and eject tips, and secures the best possible accuracy and precision. In microplate applications, demand for optimum pipetting performance, and comfort is even greater due to higher number of repetitions and samples.

The new interlocking ClipTip technology offers a next-generation design in sample preparation by saving valuable samples/reagents as well as time and resources while increasing confidence in pipetting results. In addition, the ergonomic benefits of this system reduce the risk of RSI, increasing overall productivity in the lab.