Sartorius, a leading international partner of life science research and the biopharmaceutical industry, closed the first nine months of 2020 with significant double-digit growth rates in sales revenue and earnings. 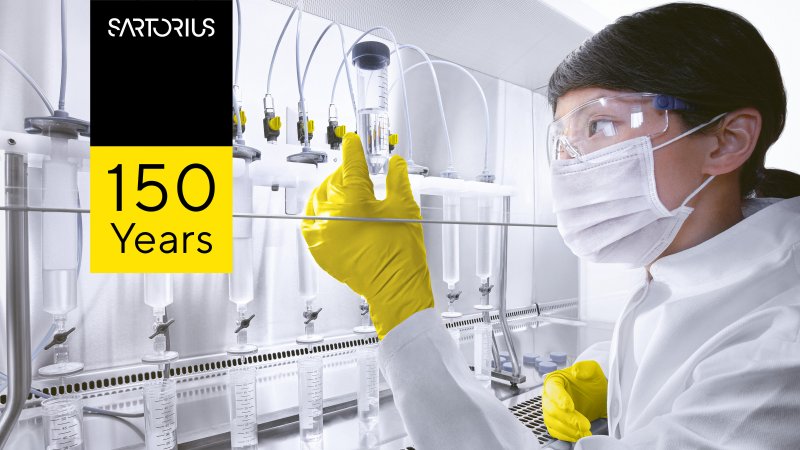 “In the third quarter, we saw high demand for nearly our entire product range,” said Joachim Kreuzburg,  CEO. “On top of overall strong organic growth, additional momentum was generated by the very positive development of our recent acquisitions, as well as by preparations of biopharmaceutical customers to build up production capacities for coronavirus vaccines and Covid-19 therapeutics. In our lab products business,  the recovery and partially also catch-up effects have been encouraging, above all in North America and  Asia. We aim to close the full year at the upper end of, or even slightly above, our guidance raised at the  end of the first half. Yet the further development of the currently worsening pandemic situation may considerably affect these results.”

Business development of the Group

In the first nine months, Sartorius increased Group sales revenue by 25.2 percent to 1,680.0 million euros,  a reported gain of 23.9 percent. The Bioprocess Solutions Division continued its dynamic growth of the first  half on into the third quarter, and the somewhat more cyclically sensitive Lab Products & Services Division showed positive development in the challenging environment of the pandemic, especially in the third  quarter. The businesses acquired from Danaher end of April 2020 as well as the majority stake purchased  in Biological Industries in December 2019 contributed around 6 percentage points to Group sales growth  in the first nine months, as expected. The net effect of various impacts caused by the pandemic amounted  to a good 6 percentage points. Order intake1 grew even more strongly than sales, up 37.8 percent (reported:  +36.3 percent) to 1,956.5 million euros, with pandemic effects accounting for around 10 percentage points.

Earnings of the Sartorius Group rose at a significantly overproportionate rate with respect to sales.  Underlying EBITDA1 was up 35.3 percent from the year-earlier figure of 361.1 million euros, reaching  488.7 million euros; the respective margin climbed from 26.6 percent to 29.1 percent. Significant  economies of scale in the Bioprocess Solutions Division played a primary role in this substantial increase in  profitability, yet lower costs added to this effect in some areas due to the pandemic situation. The most recent acquisitions had an insignificant effect on the company’s earnings margin, while currency  headwinds had a dilutive impact of about half of a percentage point. Relevant net profit1 for the Group  increased in relation to sales, by 37.9 percent to 211.2 million euros. Consolidated earnings per ordinary share were 3.08 euros (previous year: 2.23 euros) and per preference share, 3.09 euros (previous year:  2.24 euros).

Business development of the regions

Sartorius grew by double digits in all regions: Reporting a sales gain of 28.7 percent to 586.0 million euros,  the Americas that accounts for 35 percent of total Group sales showed the highest dynamics. Sales revenue  in the EMEA2 region which contributes around 40 percentto Group sales, rose 23.6 percentto 672.6 million  euros. Generating around 25 percent of Group sales, the Asia | Pacific region also recorded a substantial  sales increase of 23.3 percent to 421.5 million euros. (All figures on sales revenue in constant currencies)

Business development of the divisions

The Bioprocess Solutions Division that offers a wide array of innovative products and technologies for  manufacturing biopharmaceuticals increased its sales revenue in the reporting period by 29.0 percent  (reported: +27.7 percent) to 1,288.1 million euros. In addition to strong organic development across all  product segments and geographies, consolidation of the most recent acquisitions contributed around  4 percentage points to sales growth. Pandemic-driven effects are estimated to have added around  10 percentage points, with around half of these percentage points expectedly attributable to additional  sales related to the ramp-up of production capacities for coronavirus vaccines and Covid-19 therapeutics  and the other half to inventory buildup by some customers. The division’s order intake1 surged in the first  nine months of 2020 by 44.2 percent (reported: + 42.7 percent) to 1,546.8 million euros and was positively  impacted by around 15 percentage points by the pandemic effects mentioned above. Underlying EBITDA1 of the division also rose very significantly due to economies of scale by 41.3 percent to 410.5 million euros,  while currency headwinds had a slightly negative impact; the respective margin increased year over year  from 28.8 percent to 31.9 percent.

The Lab Products & Services Division specializing in equipment and technologies for laboratories, primarily  in the pharmaceutical sector and life science research, showed robust development over the nine-month  period in spite of the difficult first half due to the pandemic. Especially towards the end of the reporting  period, the division’s bioanalytics portfolio developed dynamically and, as part of it, so did the protein  analysis business acquired from Danaher. Regionally, business expanded most strongly in North America  and Asia. The division increased its sales by 14.2 percent (reported: +13.0 percent), with the acquisitions  contributing around 12 percentage points, while a negative effect of more than 3 percentage points was  recorded as a result of closure of some customers’ laboratories, mainly in the first half of the year due to the  pandemic. Order intake1 rose at a slightly stronger rate than sales, by 18.1 percent (reported: +16.7 percent)  to 409.7 million euros. Underlying EBITDA1 for the division stood at 78.2 million euros (+10.8 percent) after  the first nine months and the division’s respective margin, which was diluted by around half of a percentage  point by currency headwinds, reached 20.0 percent (previous period: 20.4 percent).

The equity ratio of the Group continued to remain at a solid level of 29.2 percent even after closing of the  recent acquisitions and the increased balance sheet total due to a significantly expanded cash position  (December 31, 2019: 38.1 percent). Net debt to underlying EBITDA1 increased in this context as expected,  from 2.0 at year-end 2019 to 2.5 for the period ended September 30, 2020. The ratio of capital  expenditures (CAPEX) to sales revenue was 8.0 percent in line with expectations (prior-year period:  12.5 percent).

Number of employees surpasses the 10,000 mark for the first time

As of the reporting period ended September 30, 2020, the Group employed 10,008 people worldwide.  Compared to headcount as of December 31, 2019, this number rose by 972. The increase has resulted, in  particular, from acquisitions and from hiring additional production staff due to the rising capacity utilization  at a few manufacturing sites. At the end of the reporting period, around 6,700 people were employed in  the EMEA2 region, more than 1,750 in the Americas and about 1,550 in the Asia | Pacific region. (Prior-year  base slightly adjusted due to the change in the scope of consolidation)

Based on its strong nine-month performance, Sartorius now expects consolidated sales revenue to  increase at the upper end of, or slightly above, the range of 22 percent to 26 percent forecasted to date. As  projected so far, the non-organic contribution to this growth by Biological Industries and the portfolio  acquired from Danaher should amount to a good 1.5 percentage points and around 5 percentage points,

respectively. The Group’s underlying EBITDA margin1 is now forecasted to be around 29.5 percent (previously about 28.5 percent). The planned acquisition of purification specialist BIA Separations that was  announced in early October and can be expected to close by late 2020is not expected to have any material  impact on Sartorius’ sales revenue or underlying EBITDA1 for the full year of 2020.

The ratio of capital expenditures (CAPEX) to sales revenue continues to remain at around 10 percent  (previous year: 12.3 percent). Due to strong cash flow, net debt to underlying EBITDA1 is likely to be slightly  below 2.75 by year-end 2020, as projected so far, even after the acquisition of BIA Separations is completed  in the fourth quarter (previous year: 2.0).

Outlook for the divisions

For the Bioprocess Solutions Division, management expects sales to grow at the upper end of, or slightly  above, the range of 26 percent to 30 percent projected so far. The division’s underlying EBITDA1 margin is  forecasted to reach approximately 32 percent (previously around 31 percent).

The outlook for Lab Products & Services also predicts that the division’s sales revenue will grow at the upper  end of, or slightly above, the range of 10 percent to 14 percent forecasted so far; the division’s underlying  EBITDA1 margin is expected to be about 21 percent (previously around 20 percent).

Due to the ongoing pandemic, this guidance continues to be subject to greater uncertainty than usual. In  particular, these projections are based on the assumptions that logistics chains will continue to be stable  and the relevant laboratories and production lines will remain continuously in operation. All forecasts are  based on constant currencies, as in the past years.

Mid-range forecasts are also subject to particularly high uncertainty at present. For the time being Sartorius  therefore has not changed its defined ambition for 2025 of achieving sales revenue of around 4 billion  euros and an underlying EBITDA1 margin of about 28 percent for the full year of 20253. With publication of  the preliminary full-year 2020 figures, management will provide a forecast for the next financial year and  explain its 2025 targets in detail.