Lab-on-chips usher in an era of shrinking labs 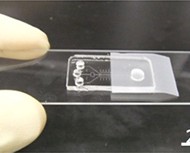 Gone would be the days when patients will have to walk-in to their pathologists for diagnosis of a disease and wait for several weeks to get the result for tests conducted by conventional methods. Laboratories are now shrinking to chips that could be as small as thumb size.

Lab-on-chip device is a concept of miniaturized laboratory that comes in a size of credit card and is embedded with network of micro-channels, electrodes, sensors, and electronic circuits. Evolved from micro electro mechanical systems devices, lab-on-chip can replicate all the functions that are being performed in several clinical diagnostics tests.

With an effort to bring the revolutionary platform for faster, accurate and cost effective diagnosis of tuberculosis, Singapore-based Veredus Laboratory recently launched VereMTB, a disposable cartridge that serves as on-chip DNA lab. VereMTB is a multiplexed molecular diagnostic chip capable of fast and accurate detection of Mycobacterium Tuberculosis Complex (MTBC).

Its mutations can complete the diagnosis and identify specific mycobacterium causing the infection and drug resistance in less than three hours from natural samples, avoiding the need for culturing, the most time-consuming part of the traditional method. It combines Micro-Electro Mechanical Systems (MEMS) with microfluidics to create a bank of micro-reactor chambers in silicon. Veredus Laboratories launched its first lab-on-chip device, VereFlu, in 2008 for rapid detection of all major influenza types.

Explaining the technicalities of the platform Ms Rosemary Tan, CEO, Veredus Laboratories, mentions that to carry out a diagnosis on lab-on-chip device, its channels are filled with sample DNA taken from the sputum of a suspected TB patient, which is then amplified into a usable quantity through a process called polymerase chain reaction (PCR). The amplified DNA sample then passes into the microchip's microarray-based detection area where its DNA is matched against the DNA of TB, its mutations and non-TB cousins.

Ms Tan said that, "Accurately identifying TB strains, its mutant variants and its non-TB cousins that closely mimic TB symptoms, is a long process that can take up to eight weeks with conventional methods. VereMTB cuts the waiting time to less than 3 hours and identifies even more strains than the 8-week method."

A lab-on-a-chip device has the potential to accurately process and analyze minute patient samples in form of human blood, serum or respiratory swabs on a single chip. A lab-on-chip diagnostic reduces the time, invasive approach and risk of cross-contamination. Due to its compact size, the system can be deployed in a wide range of settings at point-of-need. It can be used at clinics or fields that allow faster diagnosis of masses at remote areas.

India based Achira, a start-up company, is also developing a platform based on lab-on-chip concept for the diagnosis of disorders associated with thyroid or female infertility. The tests linked to these disorders can be easily multiplexed allowing multiple parameters to be tested using a minute amount of patient's sample blood or urine.

Dr Dhananjay Dendukuri, co-founder and CEO of Achira Labs, explains, "The idea is to remove testing from a centralized paradigm and move it to the doctor's office. The sample, along with the buffer, would be loaded on the chip by a technician, which would then be fed into the reader. The microfluidic chip, which is smaller than a credit card, would have channels etched on them, through which the sample will flow."

He further added that, "Along the channels, there are minute amounts of reagents which will react with the sample and, through fluorescence-based detection, give us results. It is a platform, which can very rapidly, within 30 minutes, be used for an array of tests and has a very high sensitivity." Hoping to release it in the market soon, Dr Dendukuri says the first product based on this will detect different levels of hormones involved in female infertility.

Lab-on-Chip works on point-of-care approach and is making easier to cut down the cost and human error. Dr Dendukuri believes that microfluidics and lab-on-chip is a field with tremendous growth potential and is enabling miniaturization of lab testing.

Frost and Sullivan notes that lab-on-chip market is a fast growing segment of the global biochip market as its wide applications have led to increased adoption in pharmaceutical, biotechnology companies, and other research laboratories. Furthermore, these chips are not limited to human applications but are very suitable for a variety of veterinary needs, food safety, and environmental testing in industrial as well as remote areas.