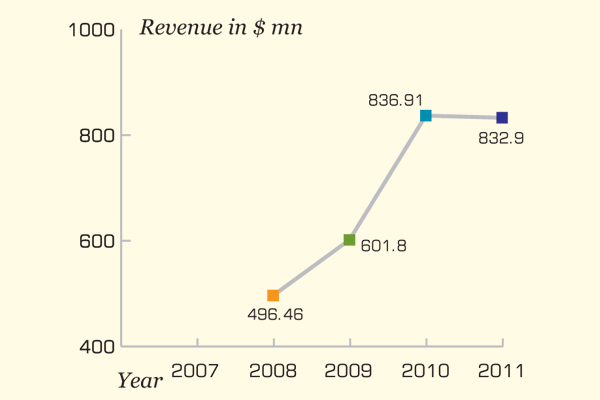 The company witnessed negative growth of less than a percent

The year 2011 marked a period of challenges for pharmaceutical companies in China due to the complex business environment and changing industry facets. Being a leading enterprise of the industry, The United Laboratories steadfastly forged ahead amidst changing market conditions. It made timely adjustments to the business development strategies, constantly developing new products and exploring new markets to solidify its leadership in the industry. However in terms of sales revenue, the company witnessed negative growth of less than a percent from $836.9 million in 2010 to $832.9 million in 2011.

In order to strengthen regulatory compliance, The United Laboratories implemented quality strategies. Its Zhuhai plant received a new national good manufacturing practices (GMP) certification in 2011 and some of its major products were granted certifications or acceptance by regulatory authorities in the US and Japan.

The company actively responded to the challenging business environment of the industry. With the production line of intermediate products in the Inner Mongolia plant coming to a full operation during the year, its contribution to the group emerged gradually. The group also actively developed and adopted new production technology to further strengthen its vertical integration and the Inner Mongolia plant succeeded in producing HPGDane salt, one of the raw materials required to produce amoxicillin, which further cut its production cost and improved efficiency.

The United Laboratories was also recognized as the world's second pharmaceutical enterprise mastering the production technology of enzymatic amoxicillin API and rolling out the product to the market. The technology has not only reduced the cost but is also compliant with the rising environmental protection standards in China.

Furthermore, the company launched four new products. During the year, the group focused on the development of international market, establishing offices in countries such as Brazil, India, Dubai, Indonesia and Germany's Hamburg, thus expanding efforts in export sales, which resulted in a higher proportion of overseas sales as compared to that of the previous year.