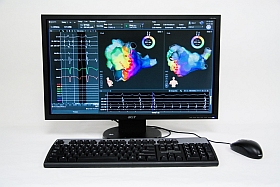 Singapore: Boston Scientific received US FDA 510(k) clearance for the Rhythmia Mapping System, a next-generation 3D mapping and navigation solution for use in cardiac catheter ablations and other electrophysiology (EP) procedures to diagnose or treat a variety of conditions in which the heart beats abnormally. The Rhythmia Mapping System received CE Mark approval in May of 2013.

Cardiac mapping has become a standard tool for the diagnosis and treatment of arrhythmias. Current mapping systems require a manual, labor intensive process to create maps, making tradeoffs between accuracy and speed. Current systems also offer limited indication of therapy success. The Rhythmia Mapping System is designed to intelligently automate map creation, increasing the speed and improving the density of mapping compared to existing systems. The system also features vMap, a validation map, which is designed to enable electrophysiologists, for the first time, to rapidly confirm the endpoints of the ablation treatment.

Dr Warren Jackman, professor of Medicine, University of Oklahoma Health Sciences Center, US, said that, "I believe the Rhythmia Mapping System will become the new gold standard for mapping and navigation. Rhythmia delivers maps of exceptional clarity because it captures thousands versus hundreds of data points. The magic of Rhythmia is continuous mapping. The intelligence built into the system virtually eliminates the need for manual annotation, which is expected to facilitate the diagnosis, treatment and final verification of arrhythmias."