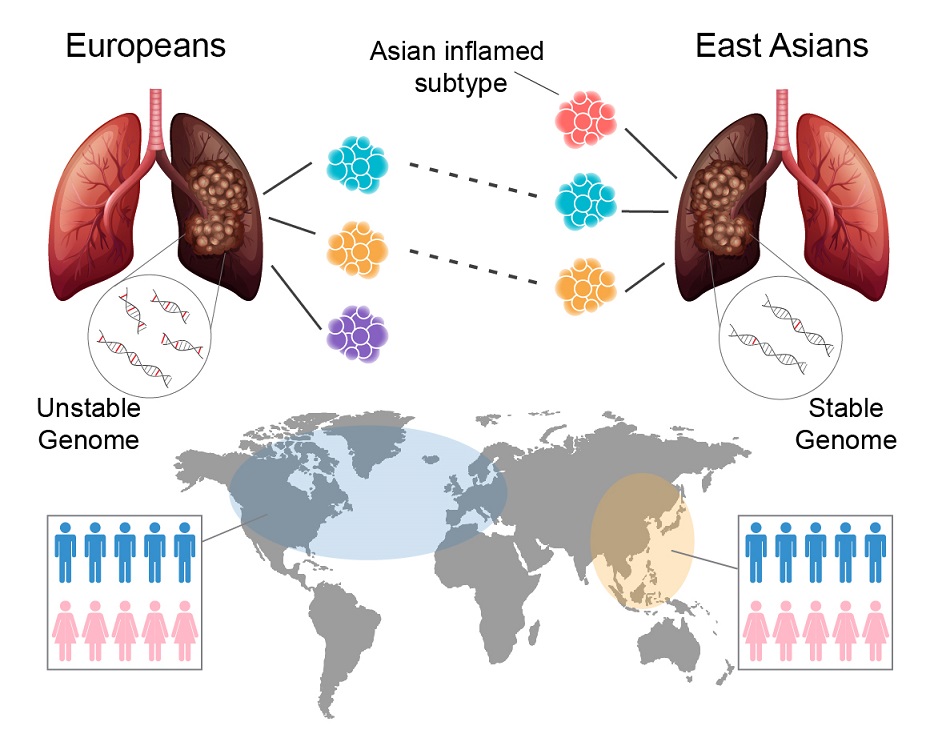 Singapore scientists have completed one of the largest comprehensive genome studies of Asian lung adenocarcinoma (LUAD). Findings from this landmark study, which were published in February 2020’s issue of Nature Genetics, are expected to contribute to the development of personalised medicine for lung cancer treatment and prevention. The study was led by scientists from A*STAR’s Genome Institute of Singapore (GIS), in collaboration with the National Cancer Centre Singapore (NCCS), and the Lung Cancer Consortium Singapore (LCCS).

Worldwide, LUAD is the most common type of lung cancer, and is responsible for over one million deaths annually. It differs markedly between Asians and Europeans as Asian LUAD patients tend to be female, non-smokers, and have more mutations in an important gene known as EGFR. Past studies by GIS and NCCS have also revealed that Asian lung cancers have higher level of heterogeneity than their European counterparts.

In this study, an inter-disciplinary team of researchers built on the donated clinical samples curated by the LCCS, and sequenced and analysed the largest dataset of LUADs for East Asians (including Singaporeans who formed the majority). The study revealed that the tumour mutation landscape in Asian patients is very unique, and several new genes may be implicated in the development of lung cancers in Asians.

One striking discovery from this study is a unique sub-group of lung tumours that appears specific to Asian lung cancers. This sub-group of lung tumours is more inflammatory in Asian patients compared to European patients, and contains high amounts of immune cells. Considering the increasing use of immunotherapy in cancer treatments, this discovery may lead to a more accurate selection of lung cancer patients who can benefit from this form of treatment.

The comprehensive analyses of the genetic and molecular features of these tumours have provided researchers and clinicians with a vista to assess the fingerprint of each lung cancer tumour. Such genomic information will deepen their understanding on how individual patients might respond differently to drug treatments, thus enabling a more precise approach to treating patients in the future. Data from this study is now publicly available via the Singapore Oncology Data Portal (OncoSG) which enables integration, visualisation, analyses, and sharing of cancer genomics datasets in Singapore.

Prof Zhai Weiwei, a principal investigator at GIS and senior author of the study, noted, “This study depicted a comprehensive genomic landscape of Asian LUADs, and characterised the complex ethnic differences between Asians and Europeans.”

Image Caption: LUADs in East Asians show a novel inflamed sub-type and more stable genomes compared with those in Europeans