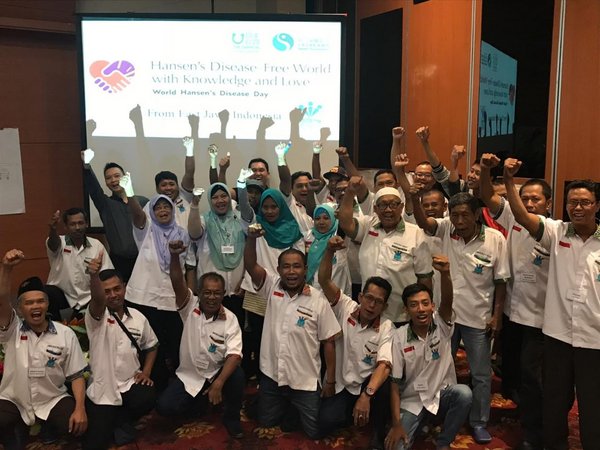 Sasakawa Health Foundation has announced the start of its first-ever social media campaign with organizations of persons affected by leprosy.

Taking part are 17 people's organizations in 16 countries that are linking up under a common logo and slogan to raise awareness of leprosy via Facebook and other platforms in the run-up to World Leprosy Day on January 26, 2020. The project is being coordinated and supported by Sasakawa Health Foundation, a foundation based in Tokyo, Japan.

Also known as Hansen's disease, leprosy is an infectious disease that mainly affects the skin and peripheral nerves. Over 200,000 new cases are reported worldwide each year. Although completely curable, the disease can cause permanent disability if untreated and continues to be stigmatized in many parts of the globe.

Using the slogan "A Hansen's Disease-Free World with Knowledge and Love" and the hashtag #WHDD2020, the joint action for World Leprosy Day 2020 grew out of regional meetings of people's organizations on leprosy held in Africa, Asia and Latin America in 2019. These meetings, together with a Global Forum held in Manila in September 2019, were hosted by the Office of Joint Program on Hansen's Disease (Leprosy) of Sasakawa Health Foundation and The Nippon Foundation.

Together with The Nippon Foundation, Sasakawa Health Foundation has been working for a world without leprosy for more than 45 years. Yohei Sasakawa, The Nippon Foundation's chairman, has served as the WHO's Goodwill Ambassador for Leprosy Elimination since 2001 and in that role has visited around 100 leprosy-endemic countries.

In recent years, both foundations have come to place more emphasis on addressing the social and economic consequences of leprosy, with Nippon Foundation Chairman and Goodwill Ambassador Yohei Sasakawa spearheading efforts to have the disease taken up as a human rights issue. This led to the adoption of a historic UN General Assembly resolution on "Elimination of discrimination against persons affected by leprosy and their family members" in 2010. Since then, the foundations continue to play a leading role in efforts to eliminate the stigma and discrimination associated with leprosy, in collaboration with organizations of persons affected by the disease and other partners.

Commenting on the joint action, WHO Goodwill Ambassador for Leprosy Elimination Yohei Sasakawa said: "It is encouraging to see organizations of persons affected by leprosy that have been active in their own countries collaborating with their counterparts overseas. Individual threads are weak, but together they form a strong rope. I am very happy that Sasakawa Health Foundation is supporting this initiative."

The Office of Joint Program on Hansen's Disease (Leprosy) of Sasakawa Health Foundation and The Nippon Foundation remains committed to working with the WHO, national governments and partner organizations for a world without leprosy and the stigma and discrimination it causes.