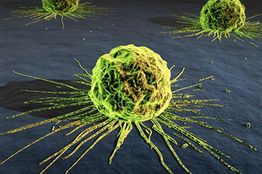 Having the means to identify patients who are most likely to benefit from currently available cancer drugs could mean saving precious lives by getting the right drugs to the right patient at the onset of the treatment.

Singapore: A team of scientists led by Associate Professor Zeng Qi from A*Star's Institute of Molecular and Cell Biology (IMCB) have discovered a new biomarker which will help physicians predict how well cancer patients respond to cancer drugs.

Having the means to identify patients who are most likely to benefit from currently available cancer drugs not only reduces substantially the healthcare cost for the patient, it could mean saving precious lives by getting the right drugs to the right patient at the onset of the treatment. The study is published in the Journal of Clinical Investigation.

Metastasis is the rapid and uncontrollable spread of cancer cells from the primary tumor to other parts of the body. It is often the leading cause of death in cancer patients. Increasingly, there is evidence to show that in many cancers that have metastasized, a protein called PRL-3 is often found to be present at unusually high levels. Since it was first identified in 1998 by Associate Professor Zeng, several other research groups have found evidence to support the strong link between elevated levels of PRL-3 protein and the metastasis of aggressive cancers in the lung, liver, colon and breast. This cancer-promoting action of PRL-3 makes it an ideal target for cancer diagnostics and treatment.

In this study, the IMCB team discovered a curious synergy between PRL-3 and EGFR, another well-known cancer-linked protein frequently associated with breast and lung cancers in humans. They found that cancer cells with higher levels of PRL-3 not only hyperactivate EGFR, but also develop an 'addiction' for it to survive.

Consequently, by suppressing EGFR activity with EGFR inhibitor drugs, the scientists observed that cancer cells with higher levels of PRL-3 were more rapidly destroyed. To validate these findings in humans, the team collaborated with Associate Professor Wee Joo Chng from the National University Health System to run an analysis on pre-existing clinical data of colorectal cancer patients. The results confirmed that patients who respond better to EGFR inhibitor drugs were those suffering from cancers with abnormally high levels of PRL-3.

Associate Professor Zeng said, "This unexpected synergy has revealed a vulnerable spot of aggressive cancers and brought new hope of treating PRL-3 driven cancers successfully. The addiction phenomenon we observed in cancer cells is akin to depriving alcohol from an alcoholic, thereby inducing the severe 'withdrawal effects'. In the same way, by selecting cancer patients with elevated levels of PRL-3 and greater 'addiction' of EGFR for anti-EGFR treatment, we can deliver more effective and targeted cancer therapy with the existing EGFR inhibitor cancer drugs."

Professor Sir David Lane, chief scientist of A*Star said, "This is an excellent example of how years of basic research lay the foundation for advancement in translational and clinical applications. I am pleased that the team is exploring the potentials of developing this new predictive biomarker into a rapid diagnostic kit for identifying patients who will respond favorably to current anti-EGFR treatment. I believe that this study will open new avenues for personalized medicine in cancer therapy."